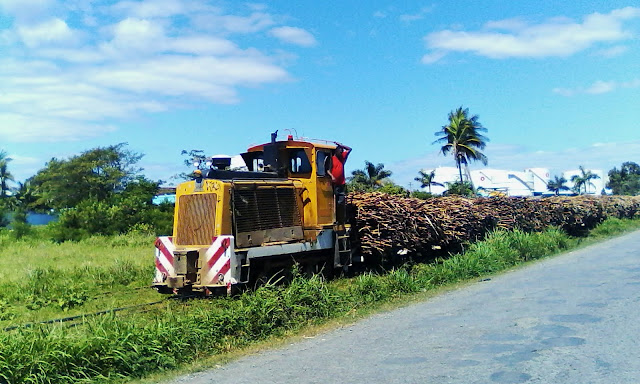 We hear this train every night and saw it yesterday whilst out for a walk, slowly rumbling along its track bound from the fields into Lautoka, sugar city. We too have slowed down, rumbling towards our momentous trip into Lautoka when it's time to become three. It won't be long now, as the mangoes ripen on the trees our precious load grows ever more ready.

With our due date just a week away now our check up appointments have been becoming more frequent and so we sail in ever decreasing circles; out away from the city and returning back. Last month we felt brave enough to venture to the top of the Yasawa Islands.  Many of the anchorages were rolly up there so when we found Nanuya to be flat and calm we stayed longer, despite the resorts nearby.  This was where 'The Blue Lagoon' film was shot with Brooke Shields back in 1980.  It was surprisingly both quiet and convivial with beautiful water for swimming, lots of friendly cruisers passing through, a farm to visit nearby for veggies and nice walks. 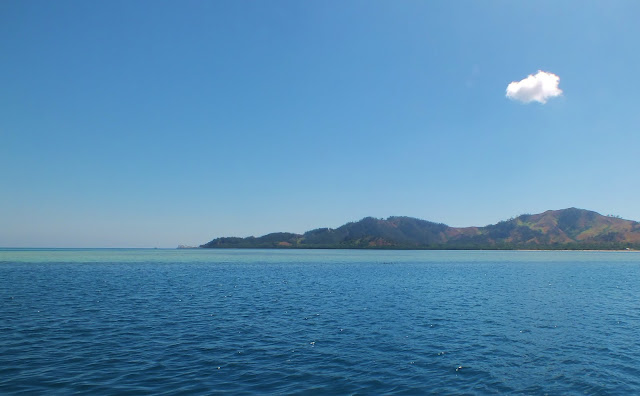 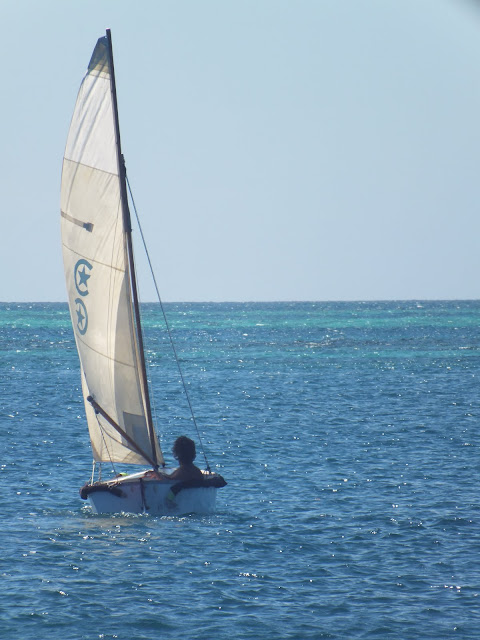 Sailing Fidget on the Blue lagoon

We spent a couple of weeks anchored off more remote villages where it was saddening to see and hear how much damage had been done by cyclone Winston earlier this year.  The crops are not fully recovered and people were obviously struggling.  It must be so disheartening re-cultivating, rebuilding, and re-roofing knowing that it may happen again each year.

Somehow Fijians still manage to be welcoming when you go to pay your respects to the chief asking to be granted 'SevuSevu'.  This is a traditional ritual where a visitor presents an offering; usually Kava (in Fiji called Yaquona) a mildly narcotic root which is prepared and drunk in a ceremonial way.  In return the chief then extends the welcome of the village to share in their space.

When the supply boat from the mainland came the whole village came out to greet those returning with goodies.  Very possibly this is more of a highlight than usual with such little food available locally. 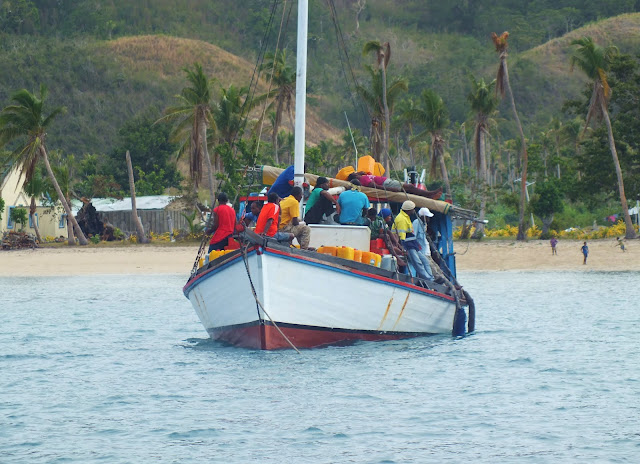 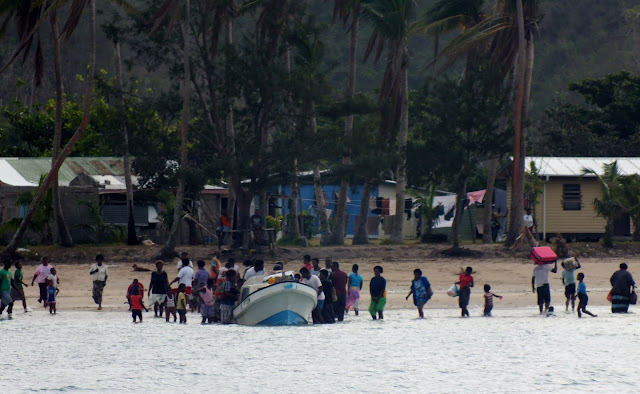 Closer to home (or more importantly hospital) are the Mamanuca islands, we stayed at Yanuya and it's nearby 'Tom Hanks Island!' where we were told much of the movie Castaway was filmed. 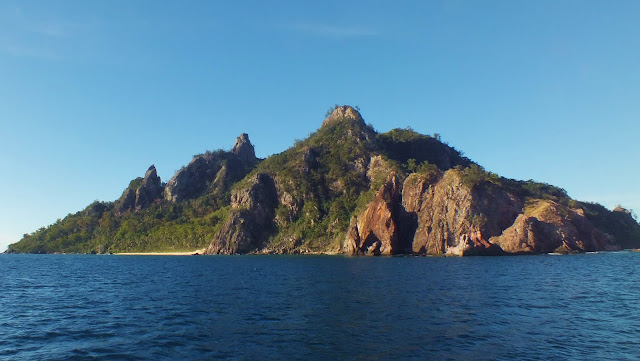 Also nearby the very beautiful Monuriki.  Not an easy anchorage but worth it when the weather is right. 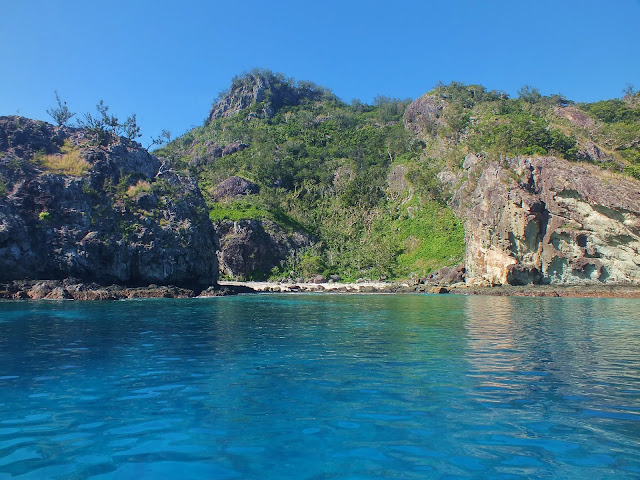 One of the absolute delights of Fiji is that as well as the rich Melanesian culture of the indigenous population there is also the charm of the other half of the population who were originally from India and have kept their cultural, religious and traditional practices alive.  We have met people whose families were originally from Sri Lanka, Bangladesh and Pakistan but most were indentured from rural Northern India back when Fiji and India were part of the British empire.  It seems they were mostly brought to work in the sugar business originally and are now third and fourth generation Fijians.

Fiji is a little like stepping in to a wonderland of India nestled in to the South Pacific islands. We've met only one intermarried couple in our time here, mostly the Indians and Melanesians maintain a slight distance whilst apparently getting along pretty well.  Politics has been a problem.  At 37.5% the Indo-Fijians mostly live on the main islands and are inclined to vote for Indo-Fijian parties.  When they get into power the Melanesians and Polynesians have risen up and forcibly changed the government.  The last of four coup d'etats over the preceding twenty years was in 2009. Peace appears to be reigning at the moment with a Fijian Prime minister who is a champion of equal rights for the ethnic Indian community and a president who is of a minority outer island descent.

As anyone who has ever experienced the joy of a Hindu festival will know its an explosion to the senses. Brightly coloured powder paint are daubed on all, coupled with intricately decorated gods and vibrant sari's. Burnt incense adds to the aroma of roadside food stalls. Then there's the music and general cheer. Its hard to mistake a festival for anything but.

We were on our boat when we heard the cymbals crash and the Shehnai players start to blow a welcome for the first of many clay gods to arrive. Ganesh Chaturthi is the festival celebrating the God of knowledge, Ganesh. He is prayed to at this time so any new pursuits one embarks upon flourish. Which for us is rather appropriate.

A few days prior to us joining in on the festivities a clay model of Ganesh would have been placed in places of work, homes and temples where they are worshiped, made offerings to and entrusted with wishes. At the end of the festival the model is immersed in a body of water where it dissolves over time signifying the circle of life. We were welcomed to join in; powdered paint daubed on our faces and we were given sweets. At the close of the festivities the idols with offerings were loaded onto fishing boats, taken the other side of the reef and pushed over into the tropical azure. 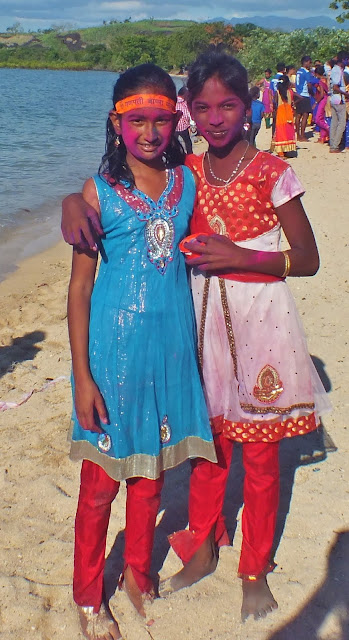 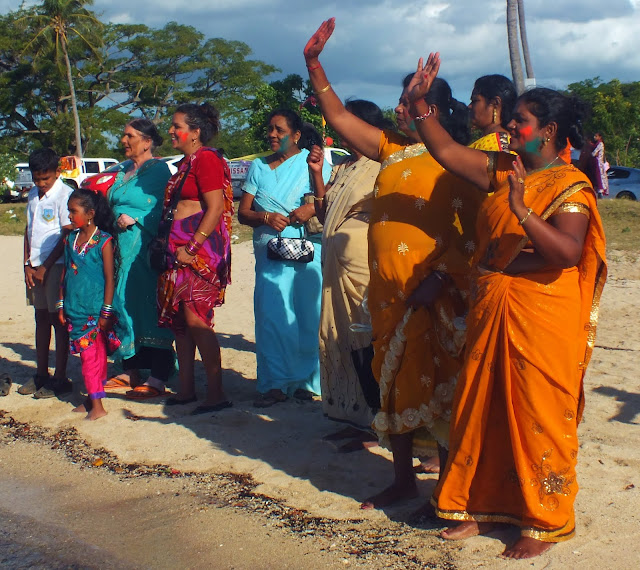 Posted by Impetuous at 10:52 AM No comments: