Drifting up the East coast; migrating with the whales

Actually it hasn't all been entirely laid back. Certainly we have had some enjoyable lazy days of slowly drifting along, hoping an offshore breeze might pick up later. But we have also had some stonking southerlies that have slalomed us up the coast.

The general run of the weather has tended to be against passage north, until, with some ferocity, a southerly change arrives. After an initial surge, the wind drops, dies and changes then the system repeats.

The trick lies in not being out when it howls with antarctic shrill nor still being out when the lumpy seas remain but all traces of wind have gone. Suffice to say our timing still leaves a little to be desired, but so, for that matter does the forecasting... 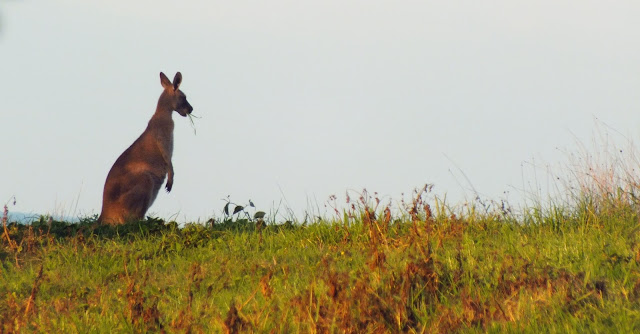 Kangaroo grazing with a seaview near Iluka 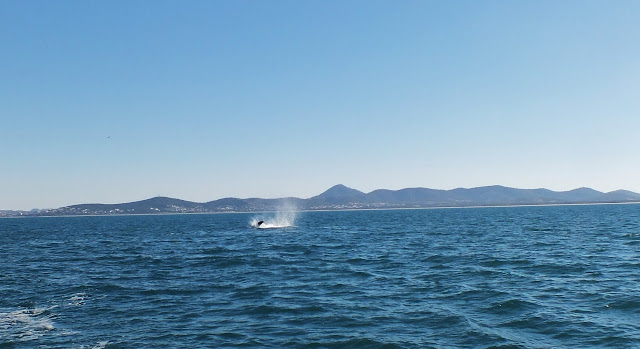 We see whales almost every day as they too migrate north, but have given up on trying to capture their feats on camera and have resolved to enjoy their displays instead. Sometimes they even come over after we've anchored and have a nosey around like snuffling huge but slow dogs. 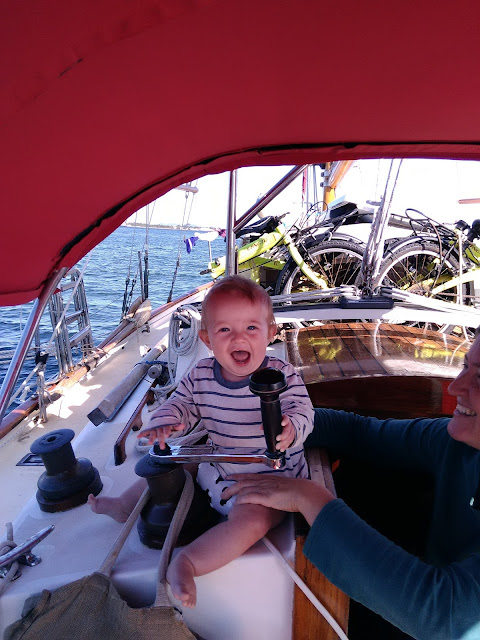 We were sad to leave Sydney in our wake. Its a fantastic city which suits the sailor. We had made various friends in Tasmania and further afield who we could now meet on their home turf.  The anchorages and public moorings are all over the city and free. Right at the end of our stay we found some amazing free hot showers laid on for the swimmers of Balmoral. If only we'd found them sooner the tourists at the fishmarket would have had less of an eyeful of us showering in the cockpit. 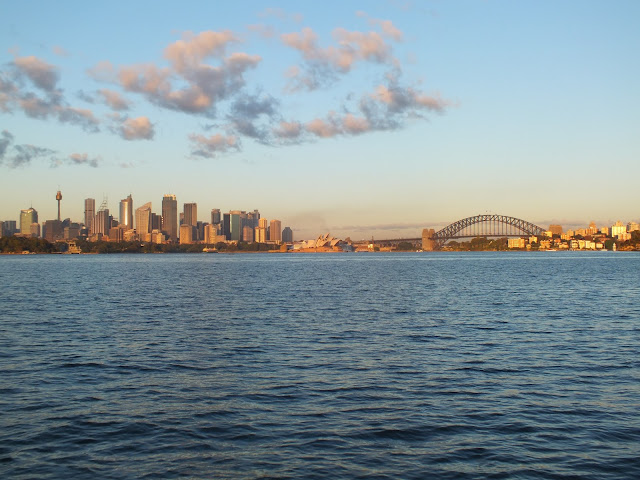 It's hard to explain what was so lovely about Sydney.  Everything seemed to work and feel positive.  Getting around to far flung suburbs for engine parts and services (boring fuel injection pump) was easy, speedy and affordable between google and our opal card (prepaid transport card).  There was more cultural diversity than other parts of Australia and we felt welcome, interested and at home. Plus of course it's a stunning harbour where there is almost always some wind for a sail. 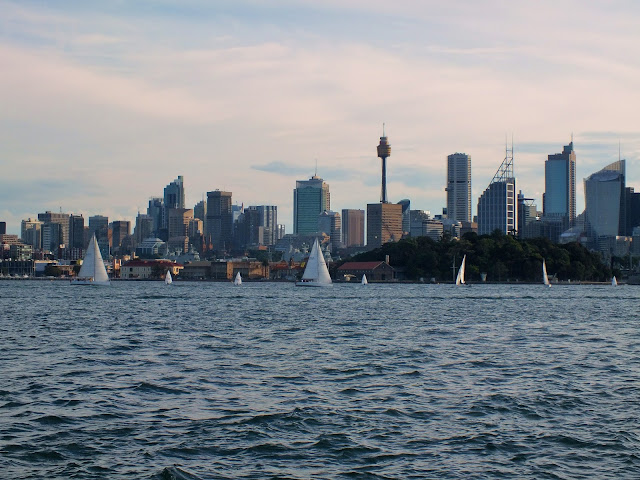 Whilst there we also splashed out on three very different treats.  The first was a fancy feathering propeller which we'd heard about whilst at the wooden boat festival in Tasmania.  George the boss had sent his apprentice Jake down to do a little touting and he managed to talk us round.

Since grinding our original fixed blade prop off on a reef in Fiji we have thought that this would be a good opportunity to buy either a feathering or folding propeller. When researching from Fiji however we couldn't find one that we liked which would fit in the  space between our hull and rudder, so at the time we ordered a replacement fixed blade from New Zealand in order to get moving again.

We were therefore ripe for persuasion when Jake showed us their design which fits, is simple requiring little maintenance, adjustable in pitch and affordable. We are delighted with our find, made locally in Sydney by JBC engineering; the Hydralign. They were extremely friendly, helpful and knowledgeable and whilst there we were able to introduce Ravi to the untold delights of engineering shops being shown around by guys who genuinely loved their jobs and were thrilled when we all showed interest. 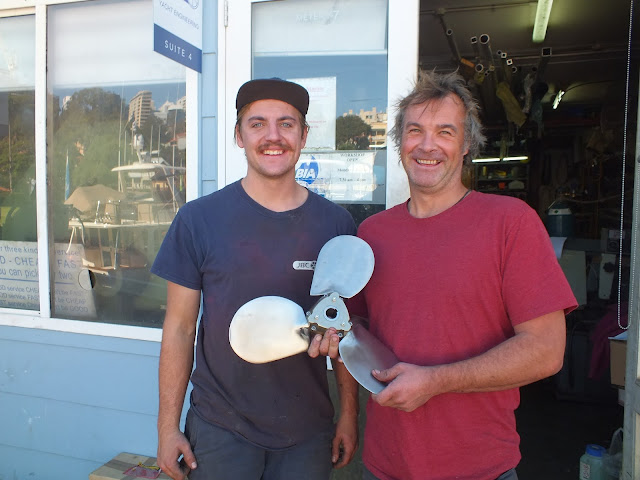 The next came from a seed sewn whilst Sally was visiting us.  She happened to mention the number of British acts on bill boards and that she'd even seen a poster with Billy Bragg on it.  A few weeks after she'd left us that thought crossed my mind so we had a look at what was on... there he was, Billy Bragg was playing the main theatre at the Opera house and in just a couple days time.  How could we pass that up? We urgently went on a baby ear defender chase since the ones we'd used in Hobart had been inadequate.

The third was not to be available in Sydney but we ordered ourselves an inflatable kayak online and had it delivered to our friends in the hills above Brisbane.

Just a stones throw up the coast and a gentle drift for us was the inlet of Broken bay, a confluence of estuaries, many surrounded by native bush. Quite the antidote to the city life we had been leading. 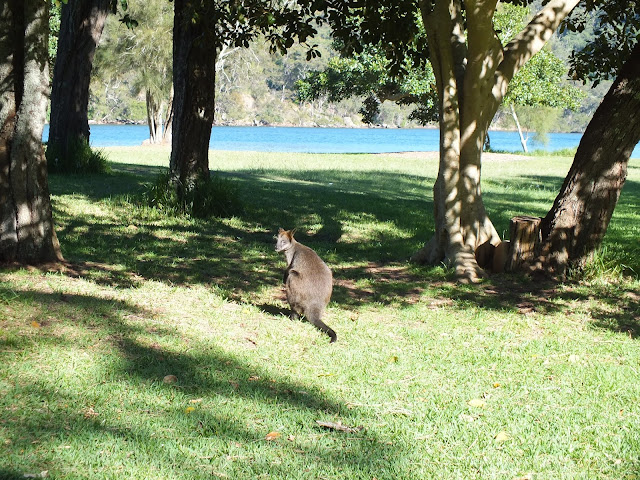 After a day of chundering crew, a stop in Port Stephens seemed a logical but unplanned choice. It also gave me the opportunity to catch up with an old friend I had gone to school with decades ago. Surrounded by our children, its sobering to reflect that some of the offspring were only a little younger than we had been when we first met. 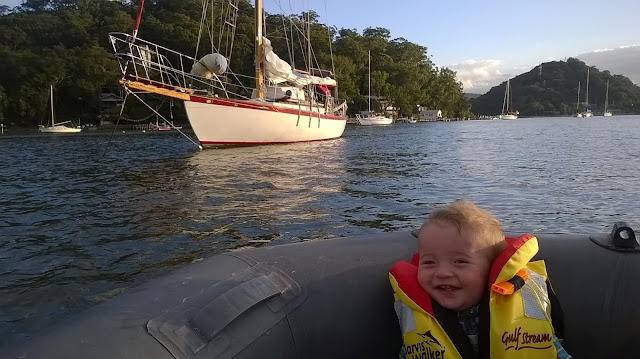 After a brief pitstop in a horribly rolly Coffs harbour we pushed on principally under motor to arrive at the delightful Clarence river prior to another northerly change.

What has made these passages so pleasant has been the ever positive charm of the Australians; many like us making their passage north to the tropics as antipodean winter takes hold. Indeed we have always; since arriving eight months ago; been  5°C too far south.

Bolstered by wine cheaper than anywhere we have known it, everywhere we go it is easy to find good anchorages with water available and when we need them, easy to find shops a nice walk away. In every mainland destination there has been another playground we can take Ravi to and now it's getting warmer the waterparks abound. 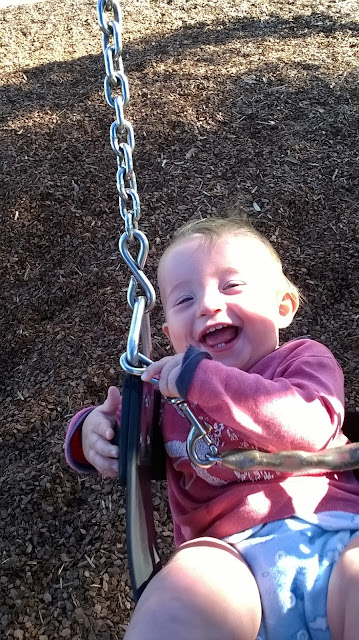 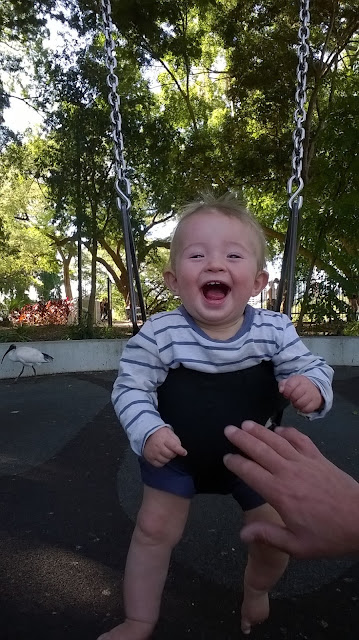 Brisbane offered us the opportunity to catch up with our friends from Fiji who had taken delivery of some books, toilet and gas parts and our lovely new kayak. They were pleased to show us their unusual and beautiful self built hilltop home so we spent a rare night ashore. We also met not one but two previous Alajuela owners; one having bought his when they were new years ago before setting off across the Pacific.

Ever conscious of the days ahead when we wont have shops close to hand, we stocked up from the Indian shops that we found within the city. We think this should last a while, semolina and dal being some of Ravi's favorite dishes, though to be honest he chomps on everything we feed him. Clearly a product of his parents. 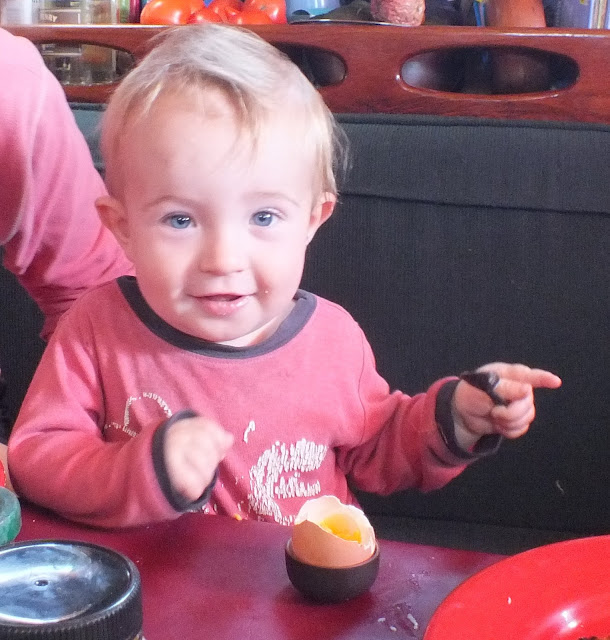 Fortunately though we are now past Brisbane so with luck have returned to the trade wind belt. All whiffs of baby vomit have been vanquished from our pillows and bedding. We're looking forward to a return to trade wind sailing whilst nestled behind the great barrier reef.

We have pressed on up the coast visiting various anchorages behind the sand islands of both Moreton and Fraser. As well as Mooloolaba where we missed another friend from Fiji and her two children by a few days, they had returned to their floating home. 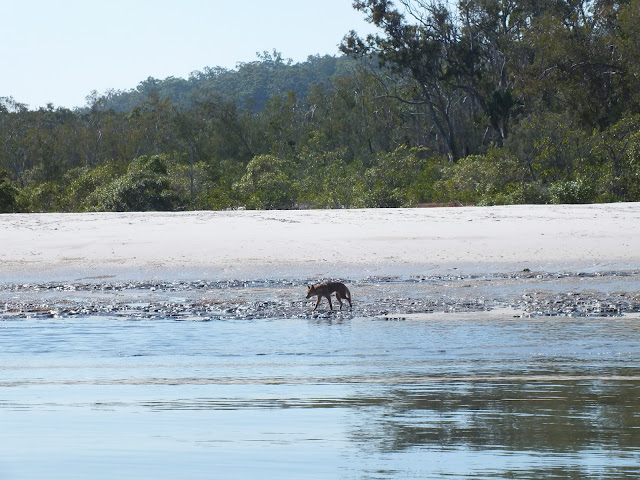 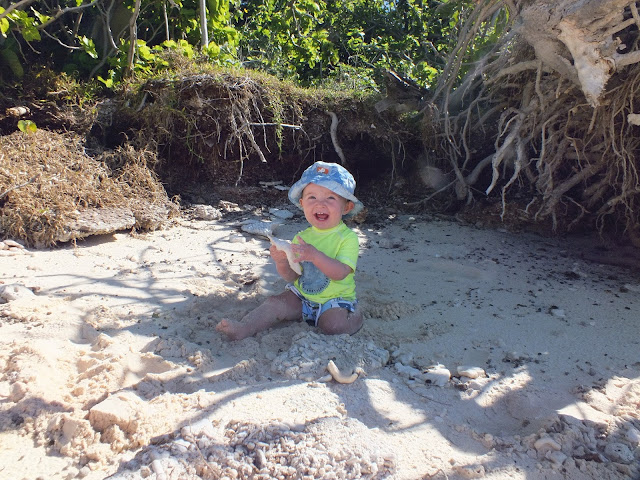 Then it was on to the slightly odd sugar farming town of Bundaberg with it's wild west feel. One of the tasks we had set ourselves was to have our chain re-galvanised so it would no longer drop its rusting debris on to our foredeck. Getting it off the boat, ashore and in to the back of a hire car was the first task; fortunately its return was easy enough, everything being that bit nearer. 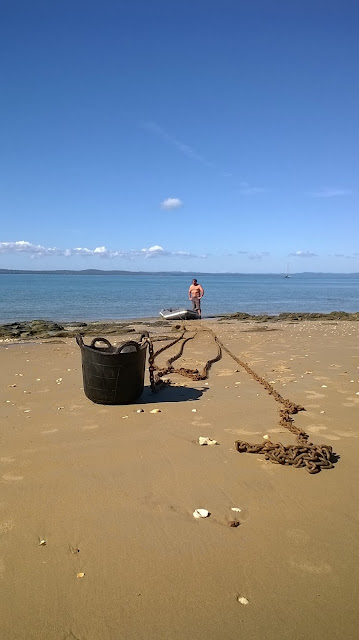 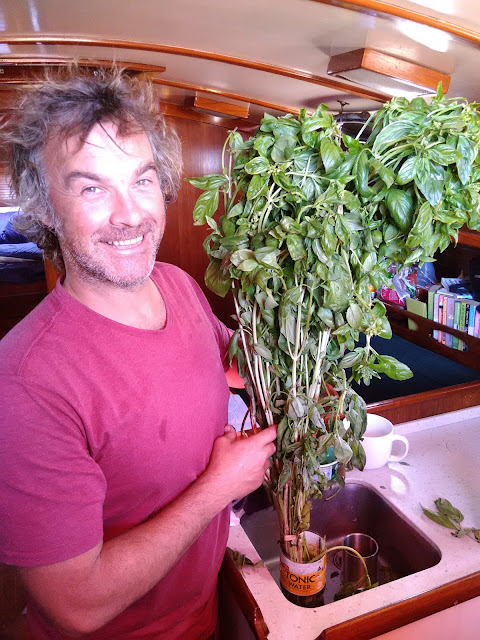 Google helps us to track down farmers markets at each stop. Plenty of pesto since Bundaberg!

For some reason our fishing in the colder climbs had been less successful but once more our freezer and bellies are full. In the last few weeks we've caught 5 tuna, one of them a prized yellowfin. 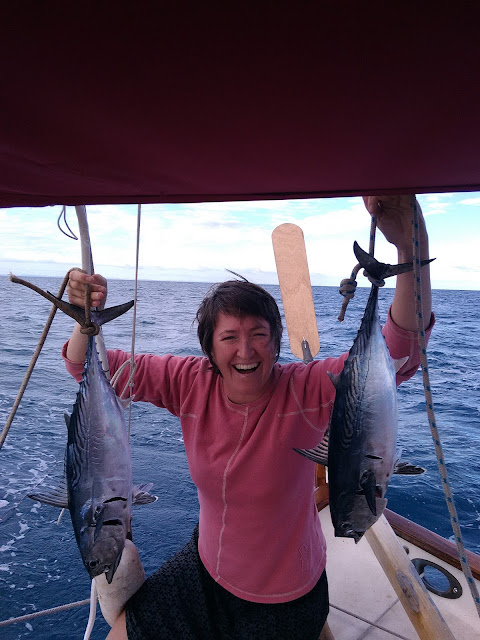 Next we commenced our barrier reef crawl at Lady Musgrave island which is a coral atol. Quiet, isolated and beautiful, though slightly busy with boats... until that is strong winds were forecast.  Then we knew our two remaining neighbours were more our kind of people. 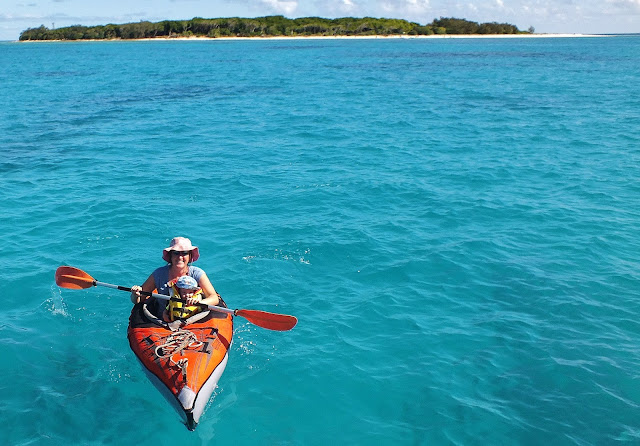 Since then we've been creeping up and up and are now at the edge of the Whitsunday islands.  Fringed by coral with sandy beaches these national park islands offer plenty to explore. 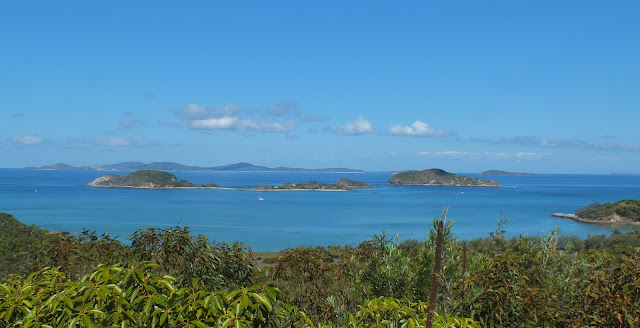 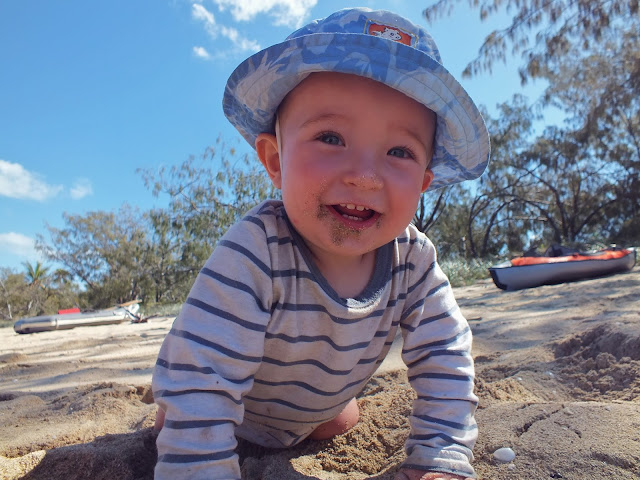 We are enjoying Australia so much we have extended our visas giving us plenty of time to explore just a small amount of the barrier reef and to get the boat more ship shape before pressing on. Ravi continues to thrive, develop and keep us highly entertained though we're determined to be stricter with ourselves and get some more boat jobs done whilst amongst the beautiful Whitsunday islands. 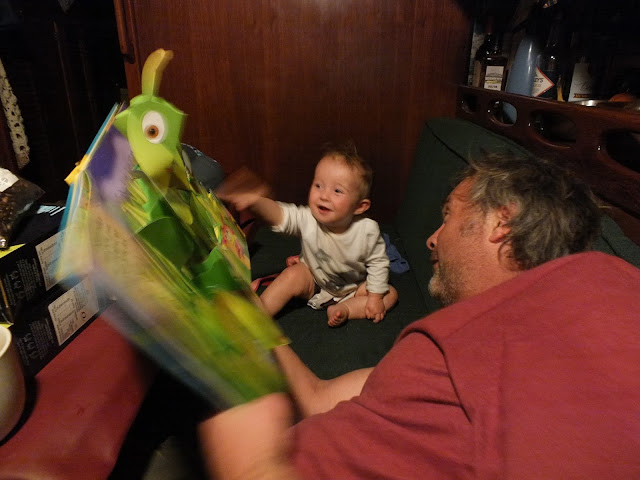 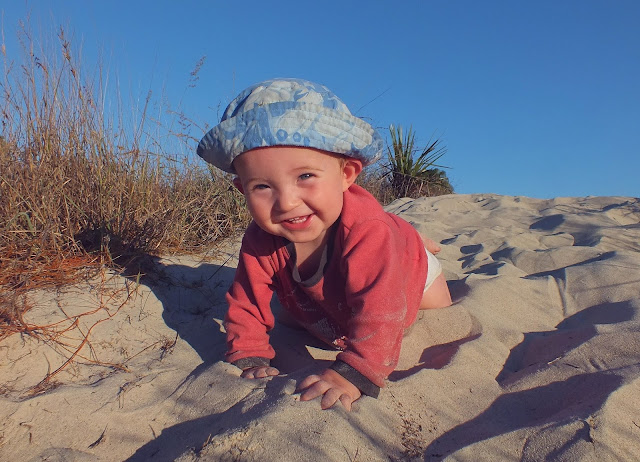