We were tearing along; rather than reefing we dropped the mainsail altogether. Slewing about at 8 to 9 knots was not how we wanted to catch our first glimpses of land. Once the main was tied up Beryl (our Aries wind vane) was able to bear off on to a dead run.

Ruth went off to sleep and I got the kettle on. A couple of hours later Hiva Oa crawled out of the dawn like a slumbering dinosaur. Her high rocky craggs becoming visible; Land for the first time in five weeks.


We left Isla Mogo Mogo (Las Perlas, Panama) on Saturday evening, the 14th June delighted to be heading out into the big blue. There were no nerves; just the exhilarating feeling that finally we were doing what we've wanted to do for a very long time. 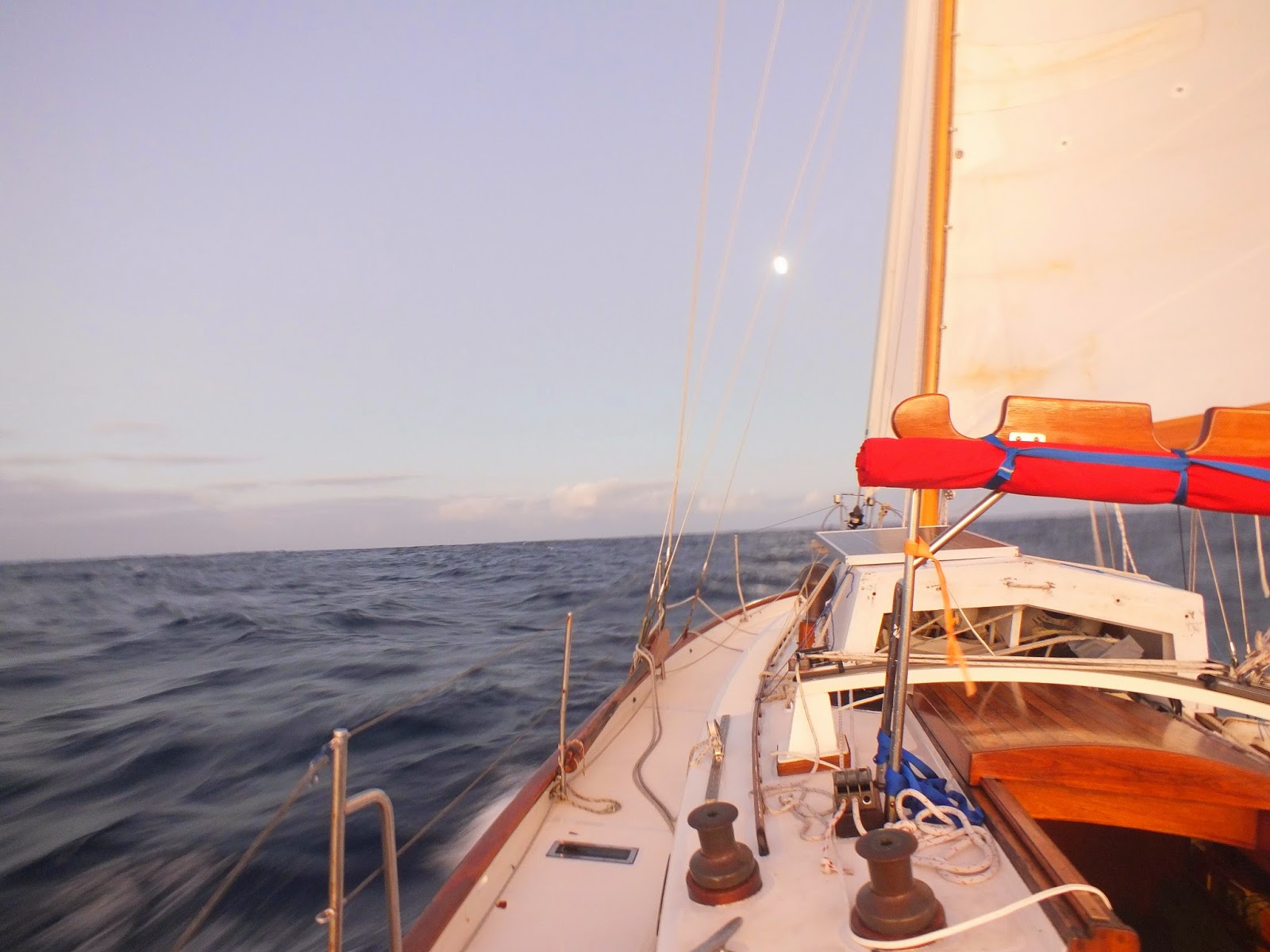 We had a beautifully auspicious start; reaching along at 5 knots. Only half an hour out a whale sounded near our boat three or four times. We put two fishing lines out and caught Mackerel on each within an hour; yum... When the wind died down later that evening we were barely drifting along, we were pleased to see that we were still going in the right direction at 1-2 knots, the current was wafting us out. 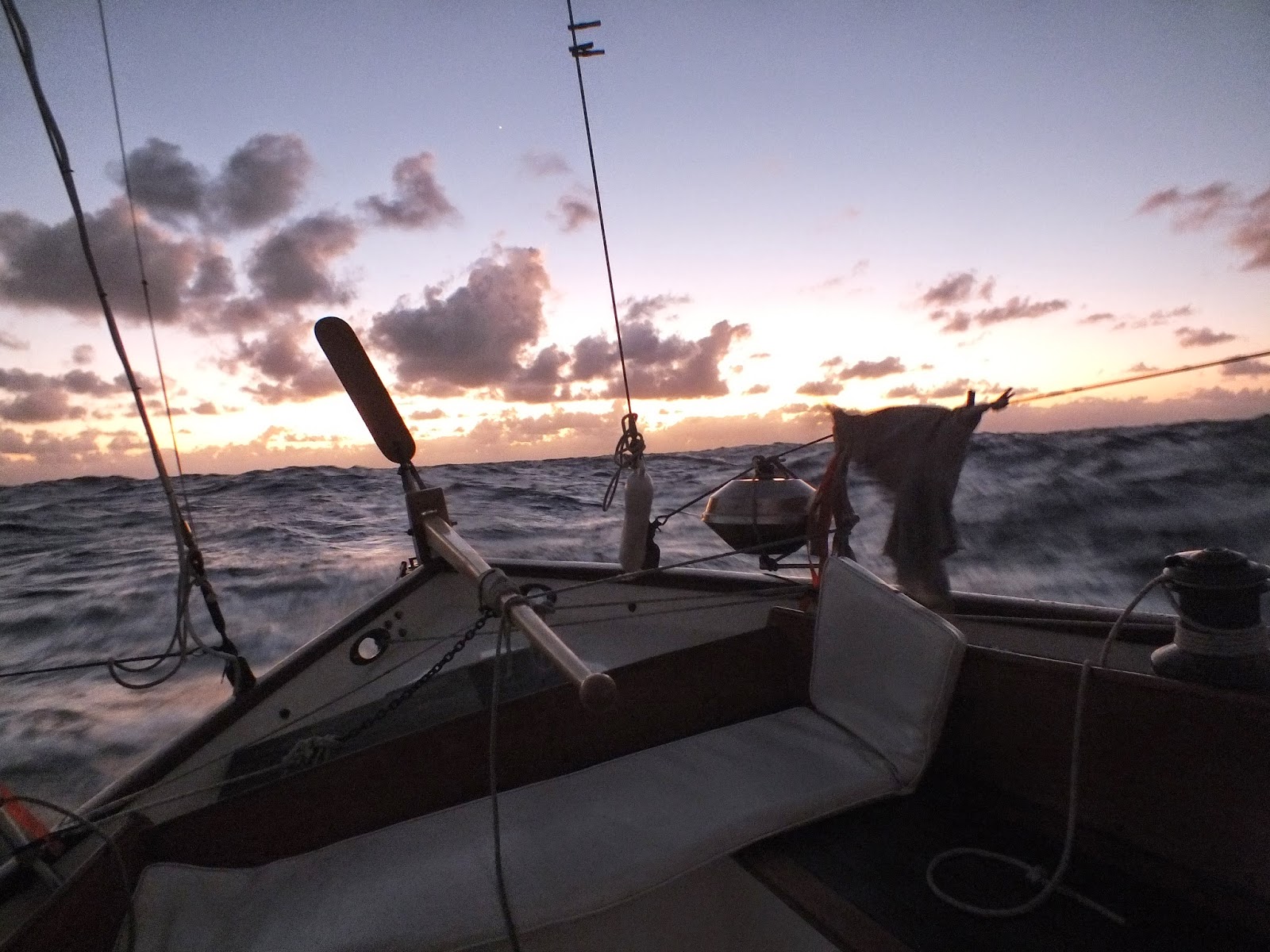 We were expecting the first leg of our trip to be arduous however, and we weren't disappointed. The sea between Panama and the Galapagos islands is characterised by fickle winds and calms. There is talk of this year being the beginning of an El Nino which may explain why there was even less wind than expected.

Our first two weeks were hard work getting nowhere slowly and at times working pretty hard to stem Impetuous going North or backwards. For two weeks we averaged only 60 miles a day with one memorable day tacking into a light head wind with occasional squalls; out one way and then back, reefing and shaking them out frequently, making a net gain of 10 miles over 24 hours! Not entirely disheartened we gradually edged our way into the Pacific and slipped further in to the enjoyment of ocean passage making, despite the unreliable wind.

It was a welcome juxtaposition from preparing Impetuous for a long passage. Endless provisioning and checks upon the various yacht systems. Stark contrast of the serenity of actually being gone. We read, tidied and relaxed between sail changes and steering adjustments. It did get increasingly frustrating however; after nights and days of rocking on the oceans wave with the sails down, sometimes loosing the hard won miles by drifting up and back; we occasionally decided to motor a little. Slowly, but at least in the right direction.

This lasted until we were a few hundred miles north and to the east of the Galapagos. Little by little a southerly wind developed; the sails went up, the engine silenced for good and we slipped away in to the second part of our crossing; the trade winds.

For the first few days we alternated between one and two reefs in the main, staysail and yankee, our daily runs smashed through their previous poor averages. We expected the pacific to be, well, pacifying, relaxing, steady wind, rolling ocean waves, puffy trade wind clouds and weeks of comfortable steady sailing. We'd pulled in the second reef and still roared along over 7 knots. For almost the next two weeks the reefs were never let out. The yankee was furled at times partially, at others fully as we bouldered along; the lee rail awash as we rolled in the excited sea. We stayed dry, if a little hot inside as the occasional breaking wave would break into the cockpit partially filling it.

As we got closer to the equator we benefited from a favourable current. Our daily averages increased beyond what we thought possible; our record was 192 miles in 24 hours noon to noon. For most of the two weeks we were rarely below the 170 mark. Our tactic of waiting later in the season for the trade winds to fully develop had certainly been effective, if not a little too so.

I'd started peering into the toilet bowl with great interest. We were soon to cross the equator, where upon the water would swill the opposite way on route back to the ocean. For a dyslexic such as myself it takes some remembering which way it swills usually so that one can truly appreciate the change. I even thought of a sentence to help me remember; 'Antipodeans go backwards down the toilet.' As we drew closer I would spend time just curiously flushing away. Well you can imagine my delight and slight surprise when about four miles north of the equator the direction changed. As we edged closer still, I woke Ruth not wanting her to miss out on the celebration. 'We're almost at the equator,' I whispered as I gently rocked her to consciousness, 'and the toilet is already swirling the opposite way!'

Though the first two weeks were frustrating, these next two weeks of tearing along with all sails reefed, were odd. We'd look at each other, 'this is not what I expected'. We'd say. Cowering inside, trusting Beryl to keep us going the right way as another huge wave smashed down on our cabin top. A bit would inevitably find it's way in through the companion way. Our watches were fulfilled by keeping an eye on how things were going from inside. Peeking out to check occasionally, then quickly diving back inside.

With little more than 1000 miles left, there was a gradual slowing. We finally shook out our reefs, opened a few windows to allow some air to circulate and relaxed in to the final stage. We managed to put up the sunshade and sprawled out in the cockpit without fear of frequent drenchings. The sea calmed a little and puffy clouds appeared on the horizon. Our fishing luck changed somewhat too. We had lost several lures to the giants of the deep as well as having some hooks bent straight before we managed to bring our first Mahi mahi on board. With our new ingredient, calmer seas and so boat, we launched with relish into a variety of new meals. Sushi being the first. 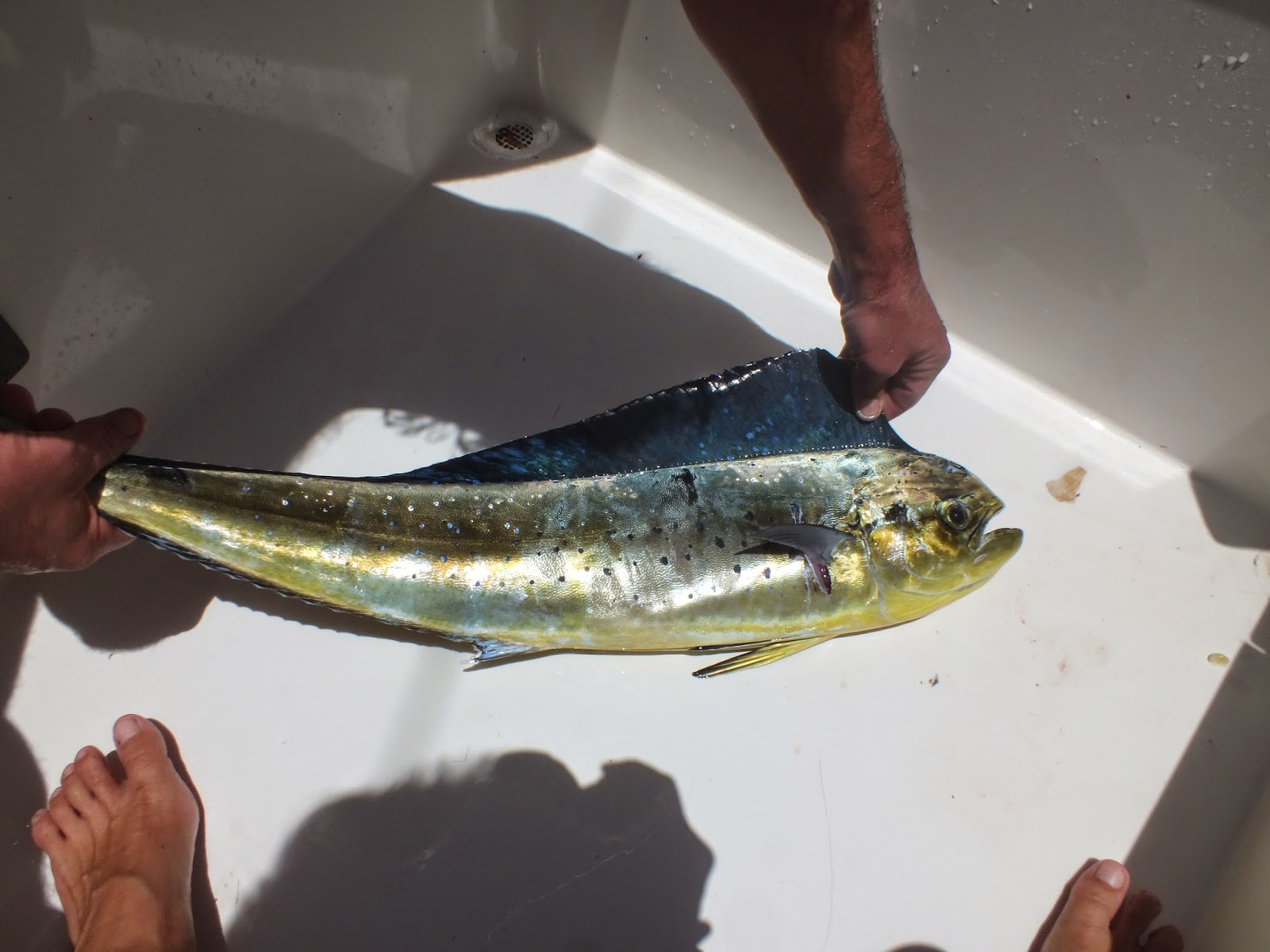 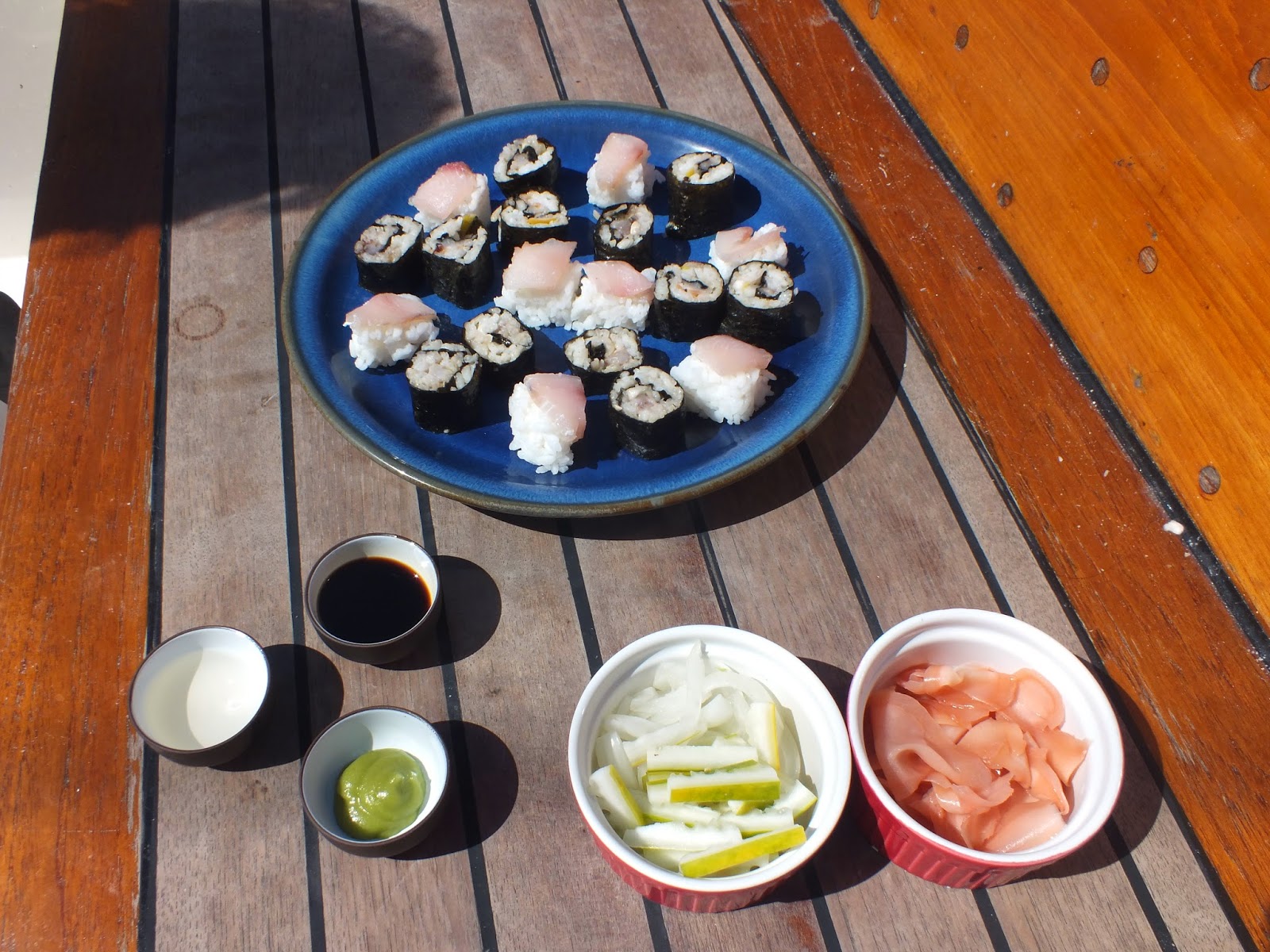 Also with the calming of the weather our attitude to the crossing relaxed once more in to the enjoyment of the passage. Days spent relaxing in the shade as the gentle trade wind graced us. No longer pounding along, all the sails were out. We rolled on the left over waves and made a steady 6 knots. As the final days slipped away I slowly realised that I hadn't done any of the tasks I had set myself for the long ocean crossing. I am still only on tape three of French lessons. The Trumpet notes and fingering which I specially downloaded before departure remain on the hard drive of a broken computer as the ocean roll has not been condusive to taking said computer to bits to retrieve the hard drive, broken or not. The list of blog ideas has remained a list. In truth we spent almost all the time doing one of four things; cooking, eating, sleeping and reading. 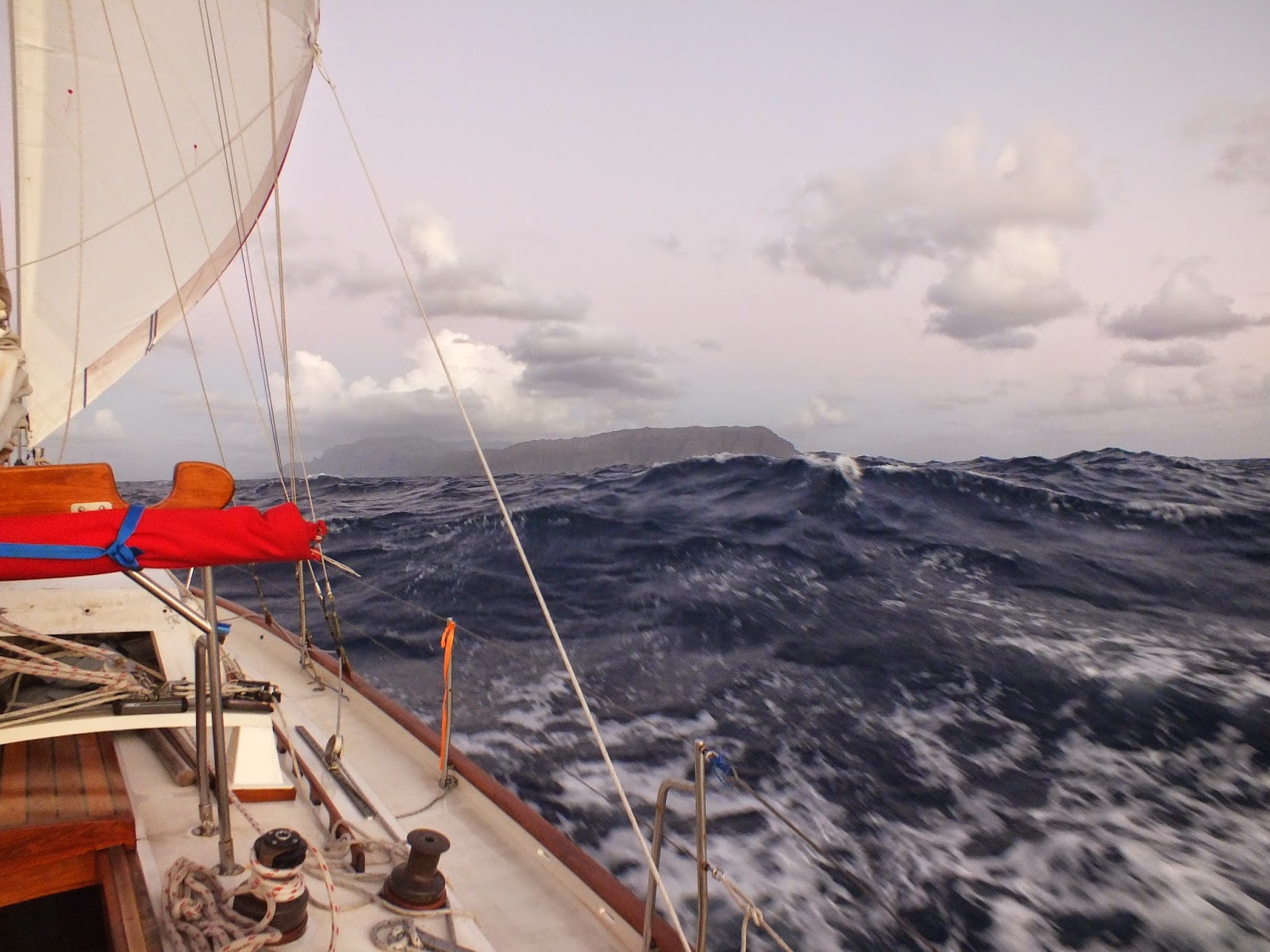 So here we are. After 35 days at sea we have arrived. Stepping back into the world at the stunningly mountainous and beautifully remote island of Hiva Oa in the Marquesas. We dropped the anchor in the bay and are told the Gendarme doesn't work weekends so there's no hurry to check in yet. We'll make our way in tomorrow, relishing the miles potter in to the village to check our legs still work. 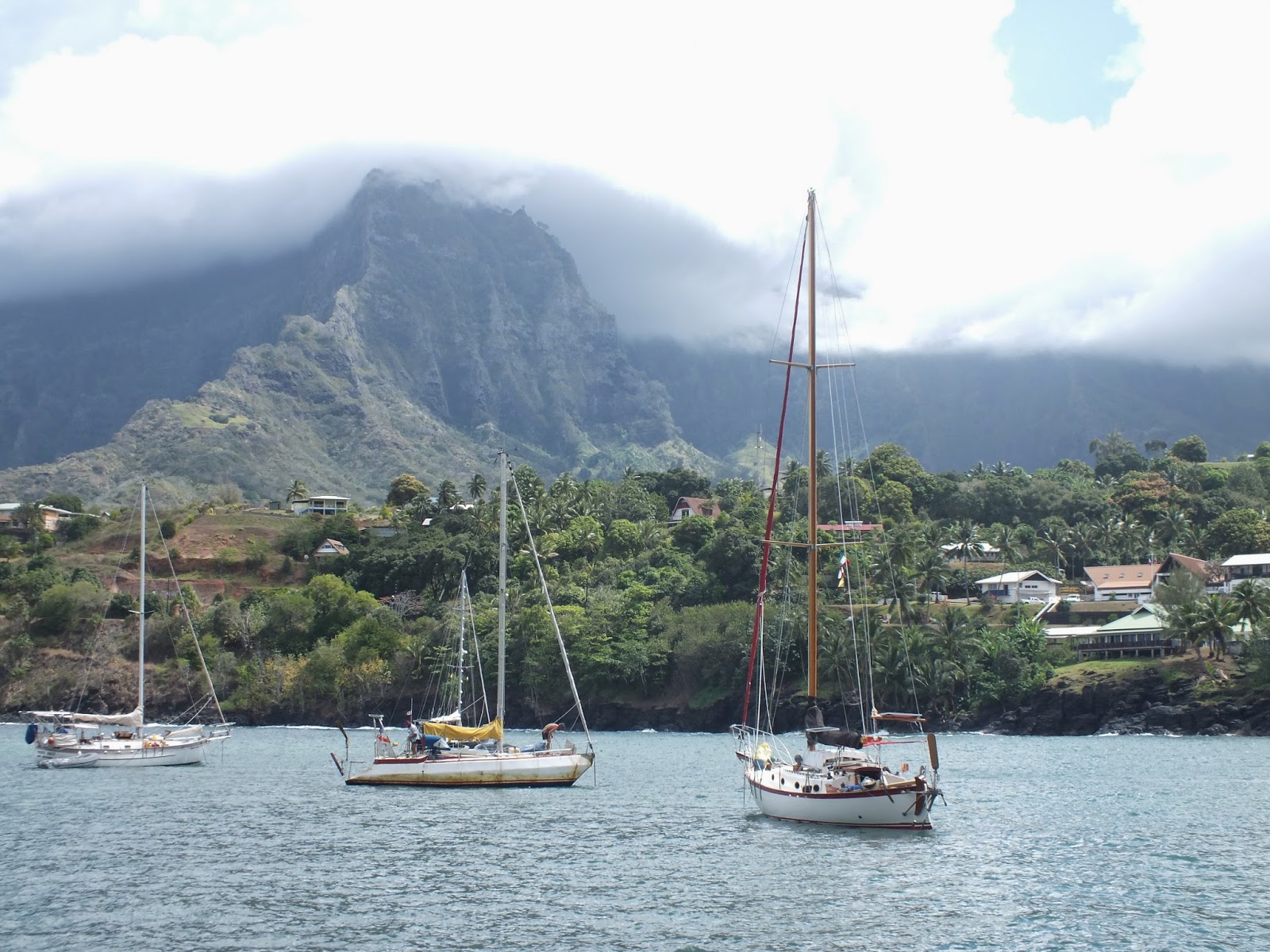 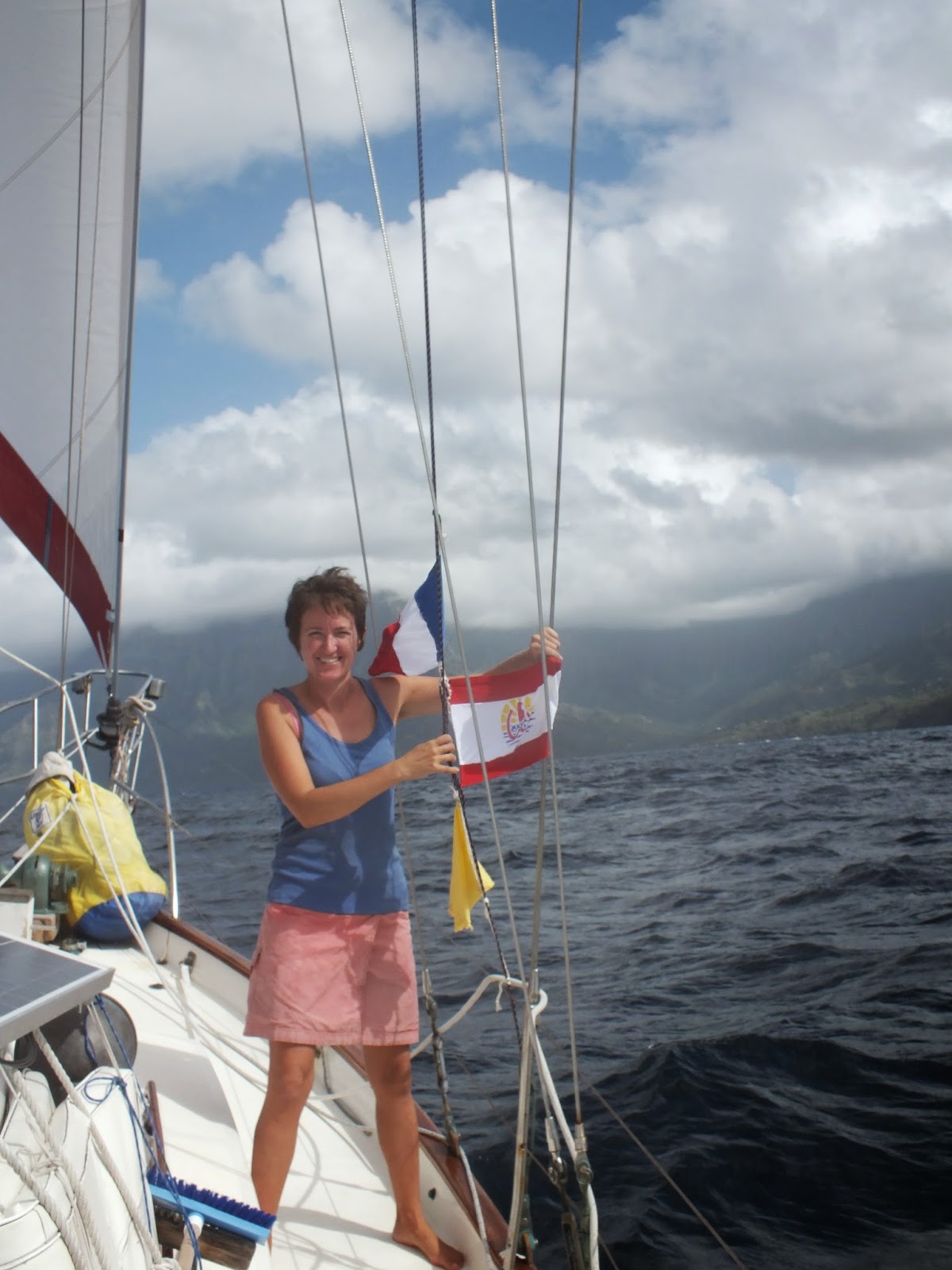 Another country, a new flag, this time we've got the French flag with the French Polynesian flag below it.  There is a Marquesan flag too but we thought making three would be excessive.
Posted by Impetuous at 11:56 PM 8 comments: