Sorry it's been so long... of course we've been having a wonderful time in magical places. Also there's been very little internet available, at least rarely fast enough to be willing to pay for. We've been moving often and so it's nice to be able to take stock now of how far we've come.

More photos from the Marquesas as it took too long to upload them whilst we were still there. 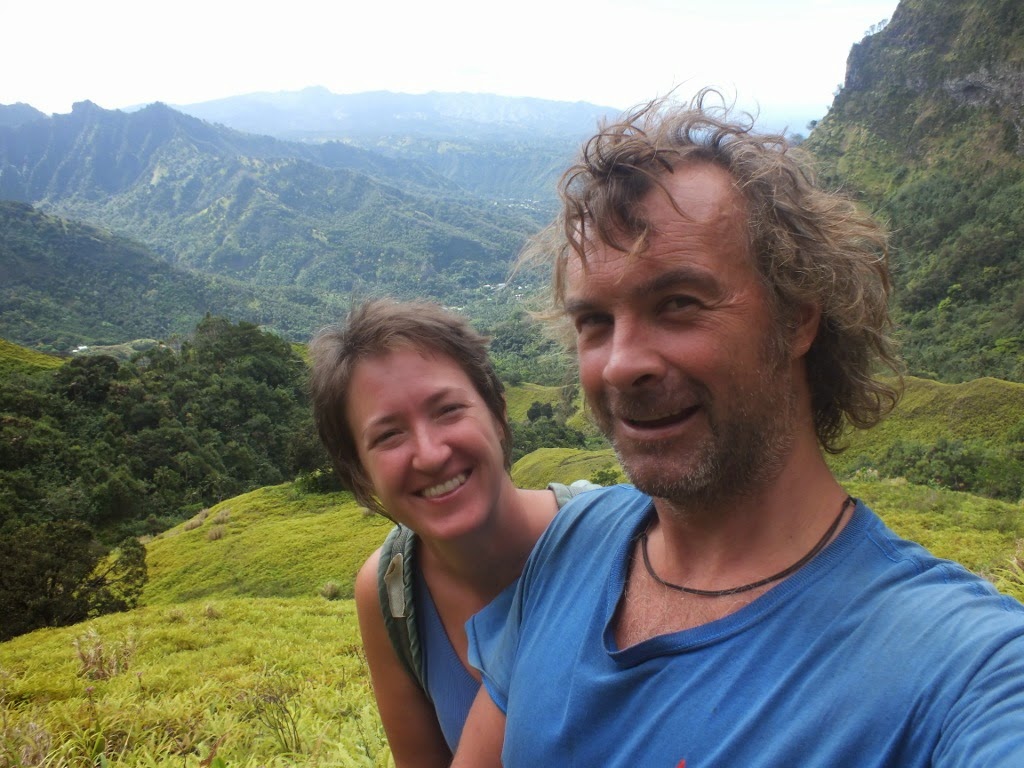 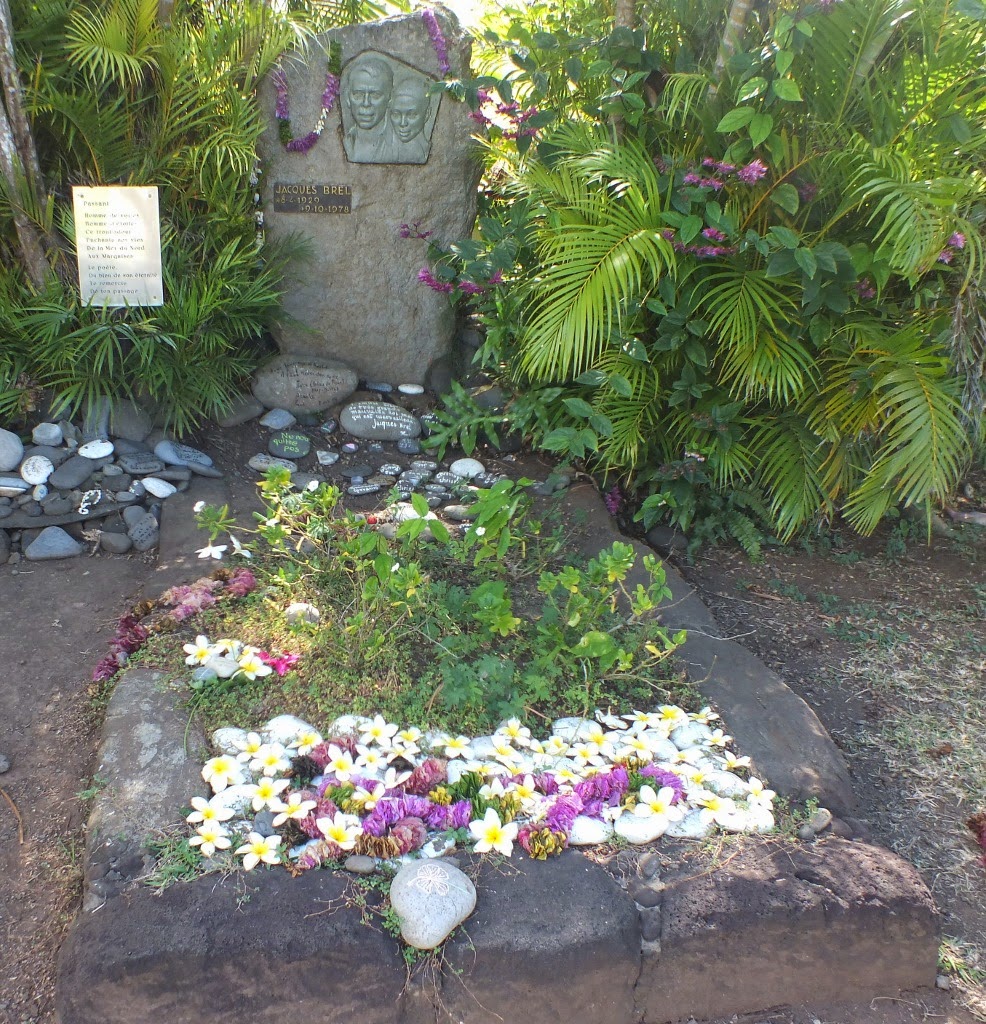 Jacques Brel's grave; the Belgian chanteur who amongst many other hearty rich songs in french wrote the ports of 'Amsterdam' which David Bowie covered. The flowers pictured lie on the floor all over these islands under the small trees that grow them and the women really do almost always wear one behind their ear; very becoming.

Several of the anchorages were quite uncomfortable with swells coming into the bays unhindered. These kept our boat in motion in a rather annoying manner, so when we found Anaho bay on Nuku Hiva to be well sheltered we knew we'd struck gold. It didn't hurt that it looked like this and that the walk over the hills was peppered with coconut, lime and Pamplemouse (big sweet grapefruit) trees. 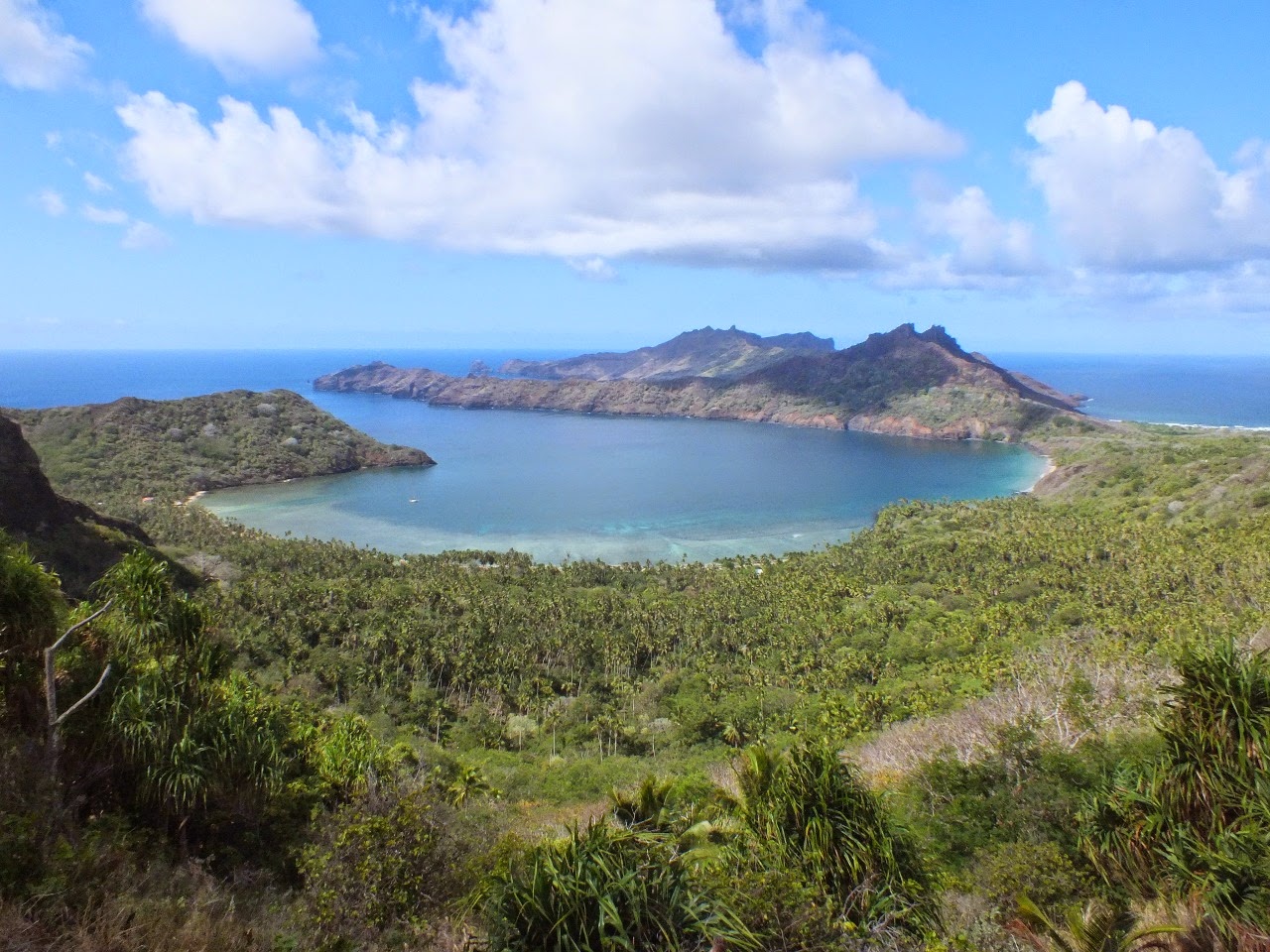 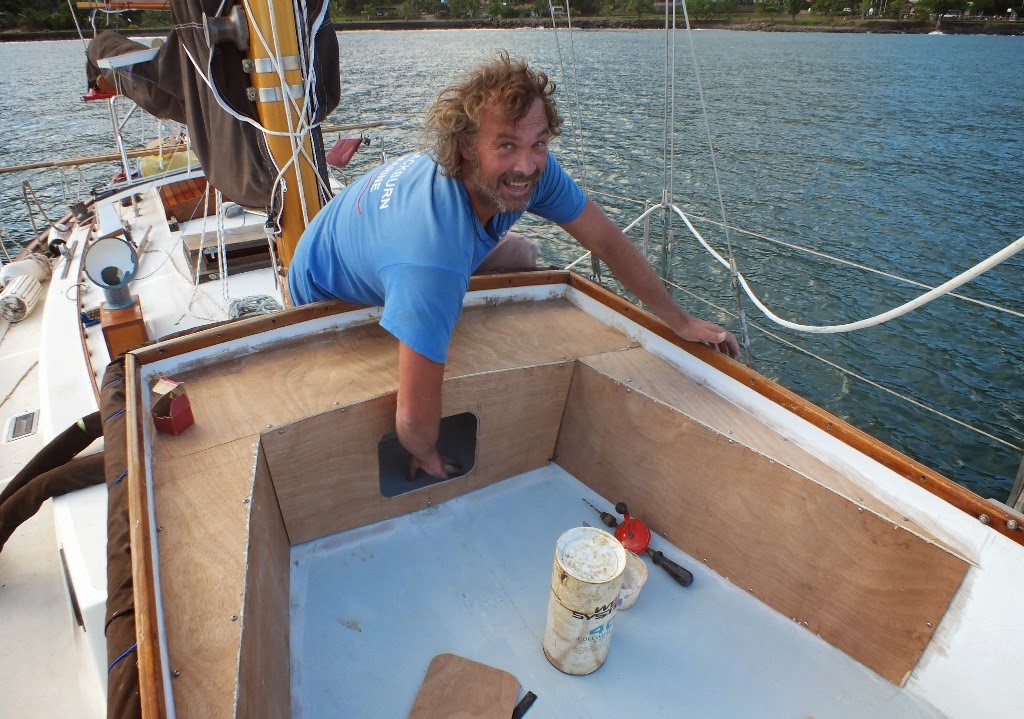 We found a bit of time between walks and socialising to improve the dinghy towards being able to sail it.  The Marquesas were varied and beautiful but it was time to push on towards the Tuamotus.

The islands of French Polynesia like almost all Pacific islands are the product of volcanic activity. Darwin was the first to theorise during his Beagle voyage that the radically different high islands and the low atolls were all part of the same process in different stages.


The Marquesas are an example of relatively recently formed volcanic activity. A weakness in the ocean floor allows magma to bulge and spill out, gradually building to the surface. There the action may continue giving rise to huge volcanic peaks, craters, lava sides and basalt plugs. Once the volcanic action slows and stops the elements start eroding the island. Birds, ocean currents and winds bring seeds, soil begins to form and life starts to weave itself around the island.

In warm waters coral polyps are brought by currents and affix themselves to the edge of the island. Coral grows from a depth of 50m to the surface at a very slow rate but this is then able to keep pace with the erosion and gradual sinking or melting of the rock back into the ocean floor. As the rock of the island slowly sinks away, the reef around the outside of the island continues to grow up to the surface and build upon the old dead coral. This makes an outer reef where the edge of the island used to be, then water fills the gap as the land sinks and erodes leaving island surrounded by lagoon then reef. This is how the Society islands are which is where we are now.

As the rock continues to sink and erode then often all that remains is the original volcanoes crater in the middle full of water then eventually all that is left is the coral reef around the outside. This keeps growing in pace and as the waves pound the coral then broken coral often builds up behind the reef. This then can form small sand and dead coral islands called a 'Motu'. So an atoll is a ring of coral with shallower sea in the middle and often with sand islands around it's edge.
The Tuamotus are such atolls which are at the end of this process. The sea around the atolls is usually very deep so they rise up very steeply out of the ocean. Whilst the islands were still high, they produce lots of rain and therefore streams flow down their sides. Where these enter the sea the coral does not grow so this creates gaps in the reef which we use as 'reef passes'. The currents in and out of these are often strong and depend on tide, wave direction and wind. Traversing them can be an experience! This one was easy to see and the weather was calm, nevertheless we had to motor in against a 3-4 knot current. 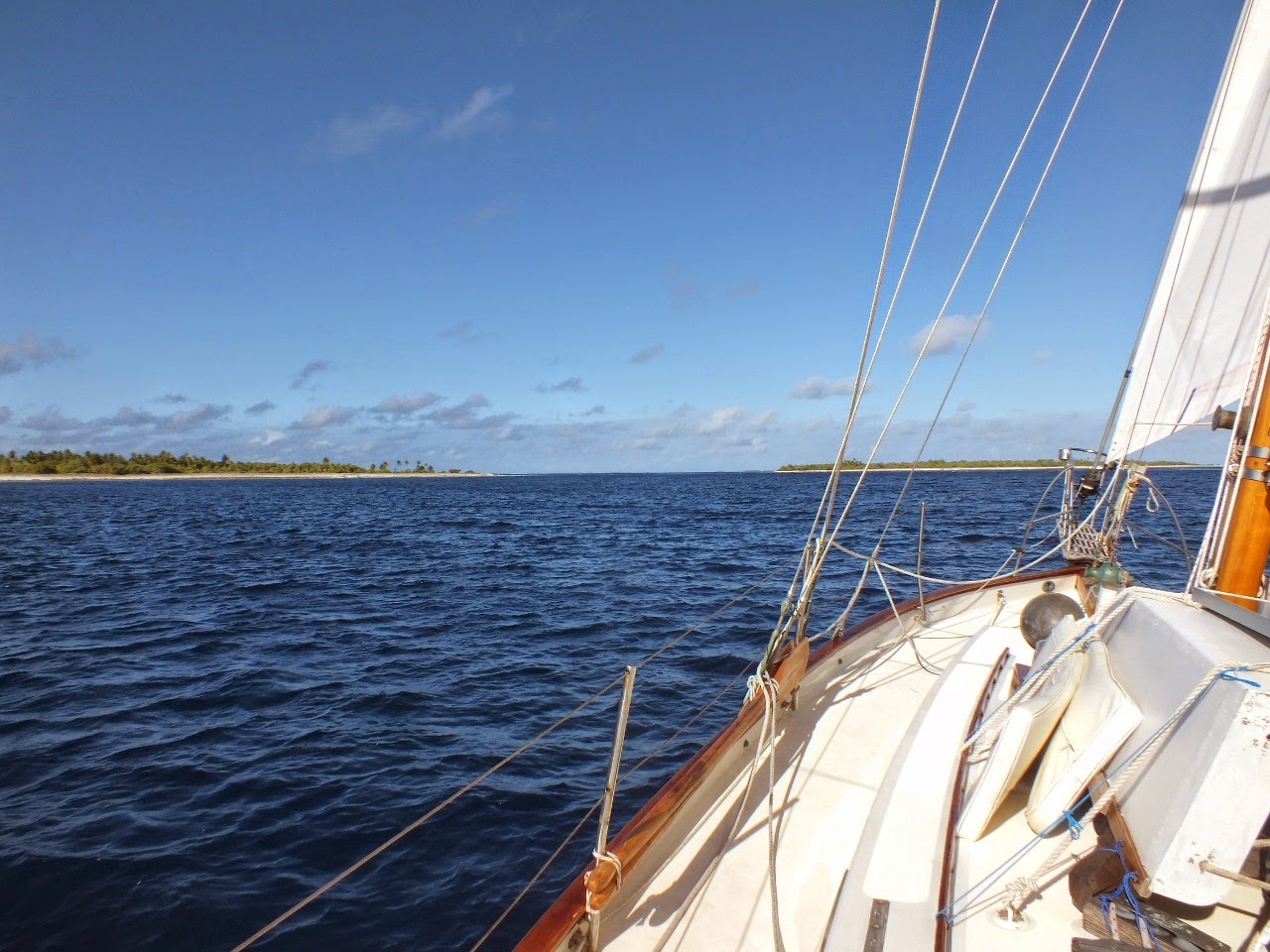 We had only a week or so in the Tuamotus and visited only 2 atolls. They were astonishingly quiet and peaceful. They are sporadically inhabited and farmed by Polynesians who trade dried coconut 'copra' used to make oil and cultivate pearls in their lagoons. It would be perfectly possible to spend weeks on each coral atoll of which there are 76 and rarely see anyone. This is a place to relax. 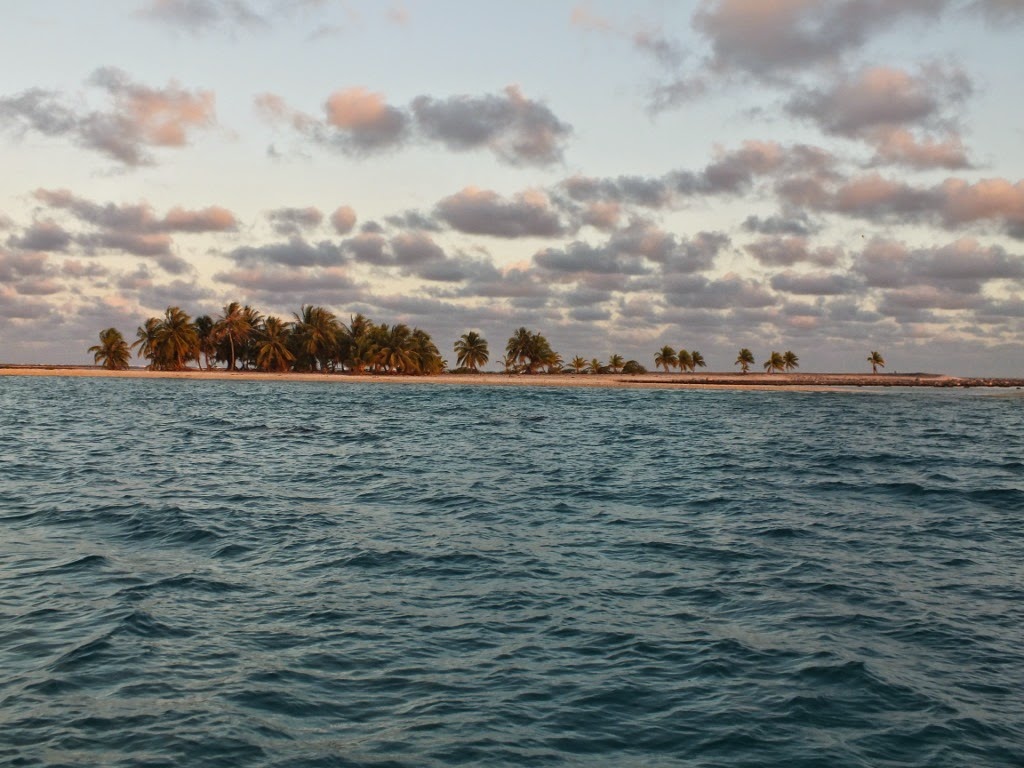 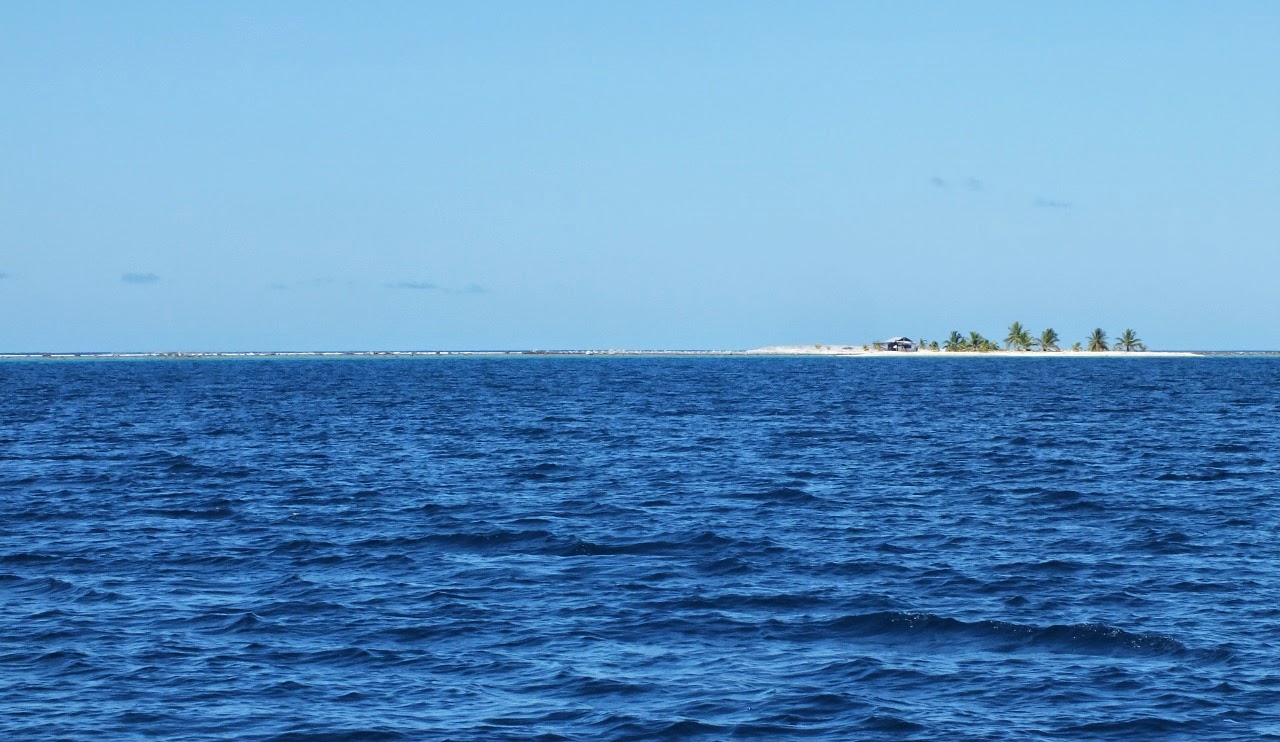 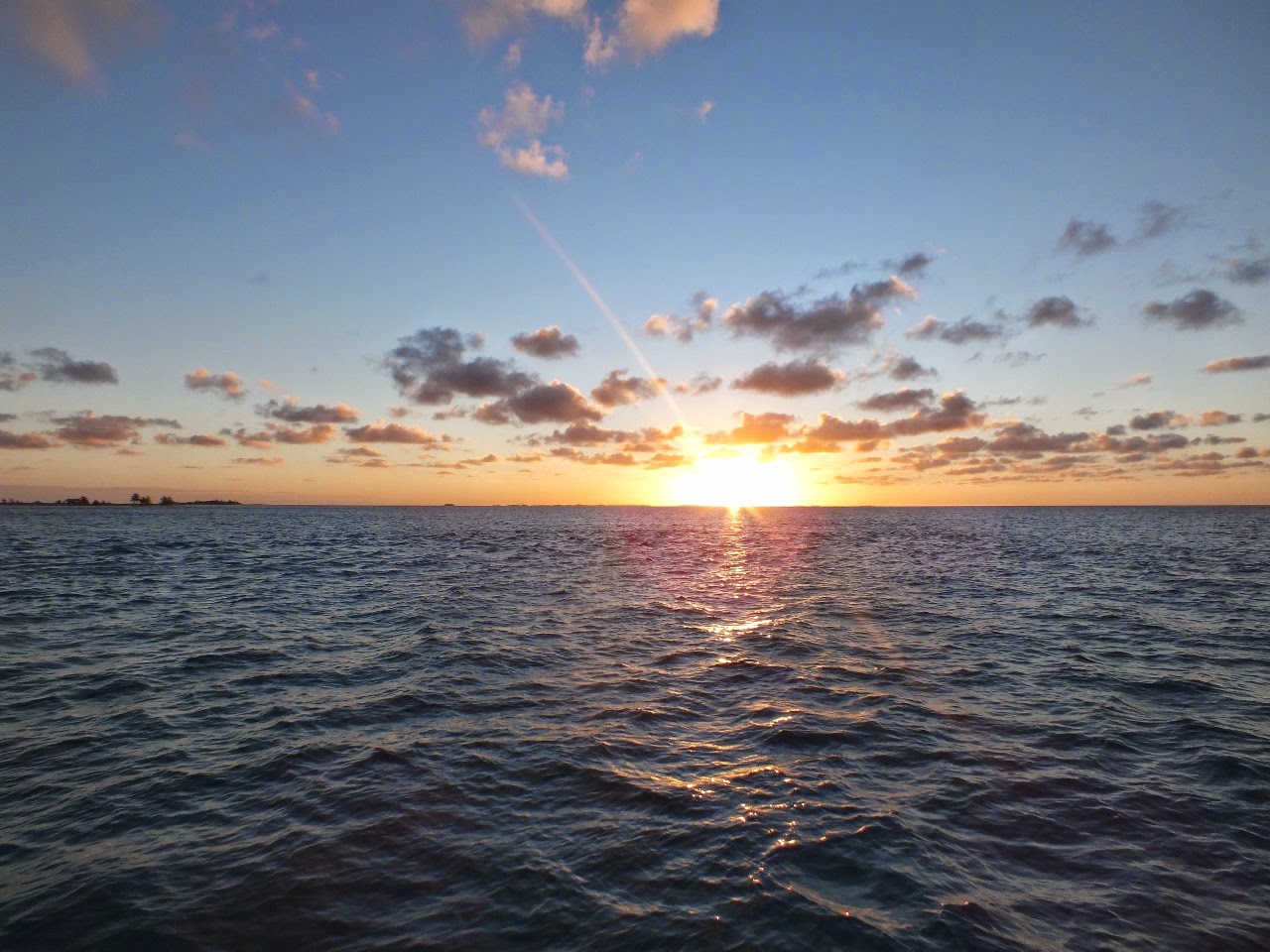 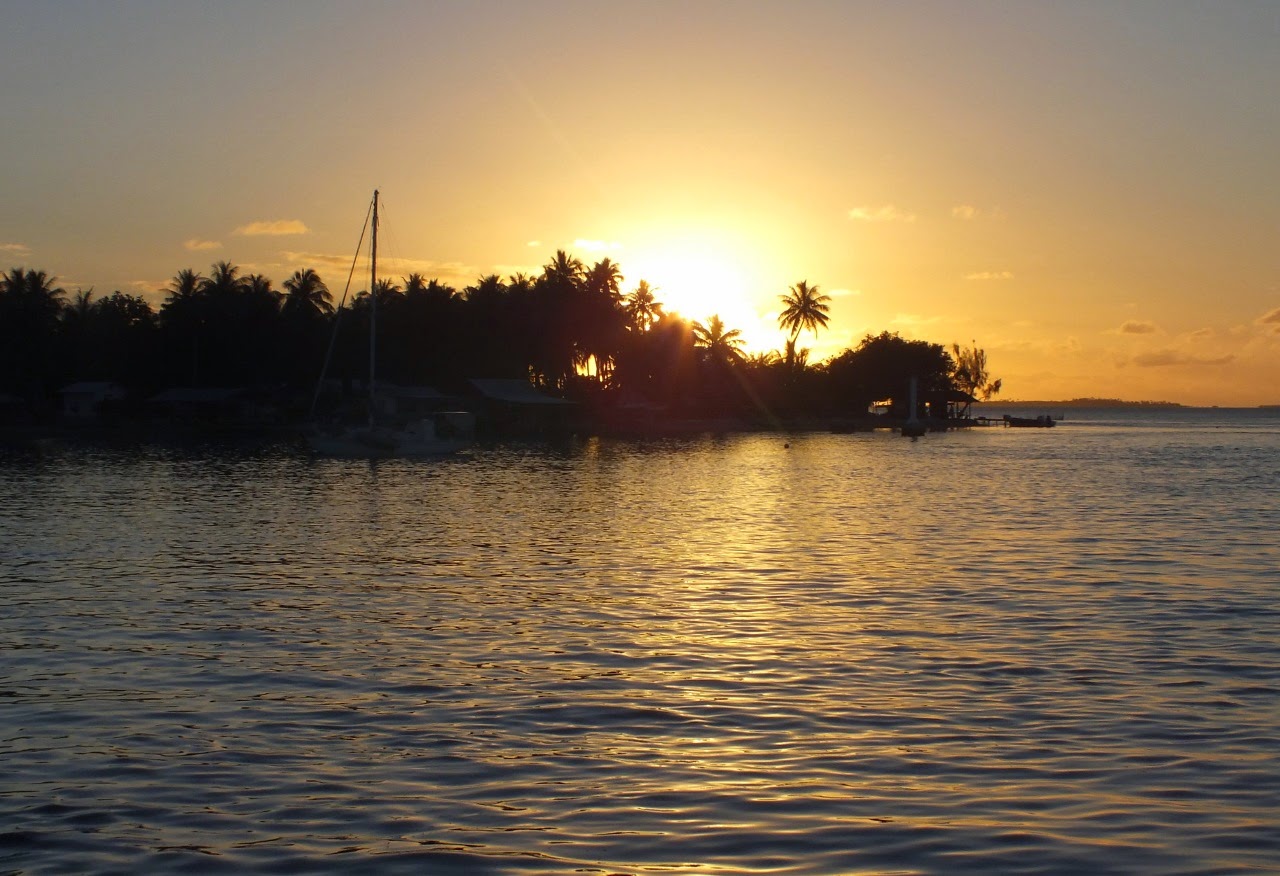 It was a beautiful gentle downwind sail onwards to the society islands which was an extremely welcome change to what the trade winds have been throwing at us up until now. These are mostly high islands which have well developed reef around them. The biggest is Tahiti and perhaps as famous Bora Bora which has been called the most beautiful island in the world by some. Duncan's parents Chris and Jean have been visiting us so we've been enjoying showing them around and introducing them to our life. 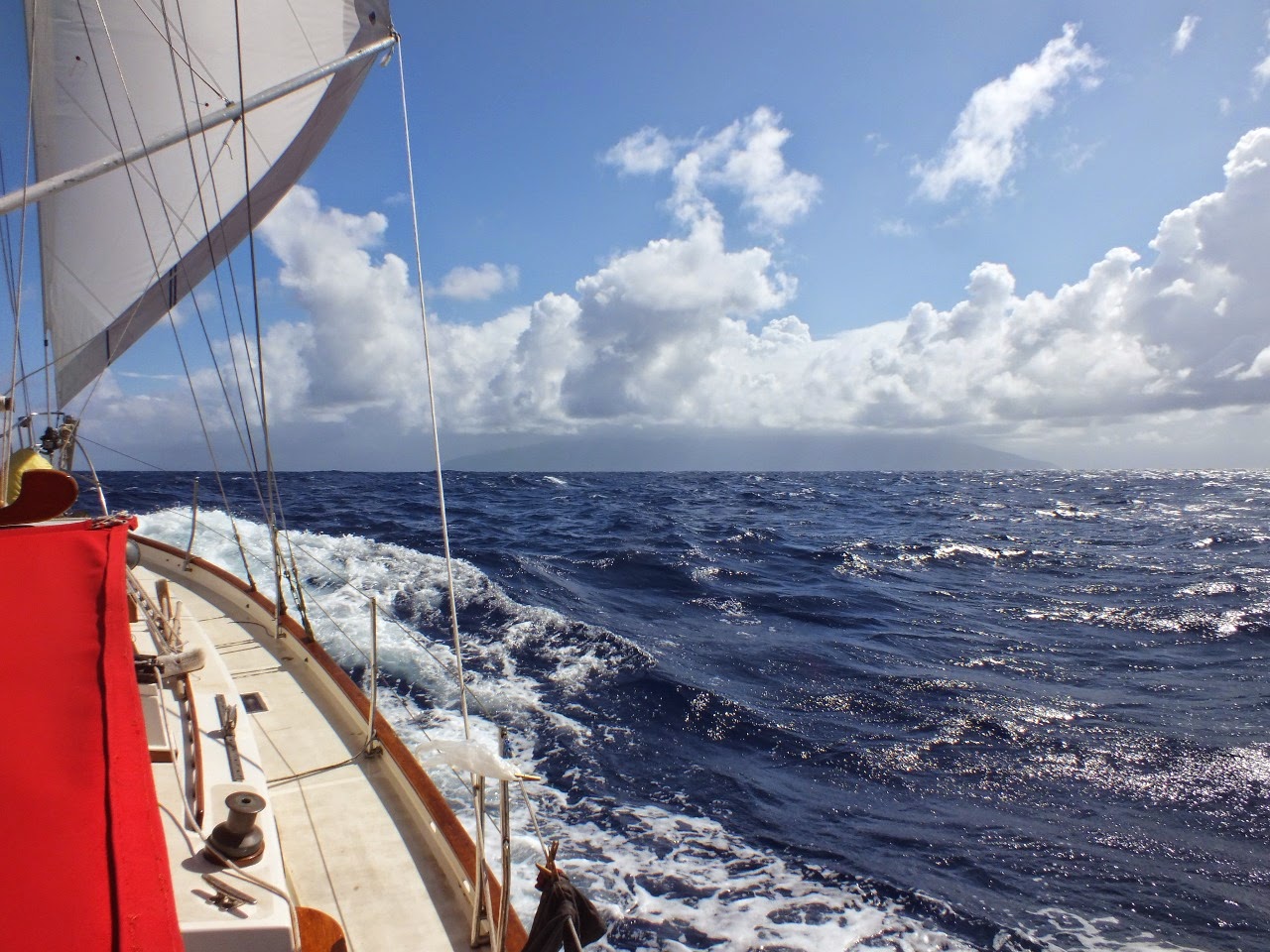