From Rags to Riches

There used to be a time I floated around the Mediterranean and the Isles of Great Britain on a small and leaky wooden Clinker boat. Pegged along the aft safety lines would usually be an assortment of rags. Some were my clothes, some tea towels and some rags. All ultimately became rags in time. It was argued by some, that this time had long since come; I simply chose to wear some. 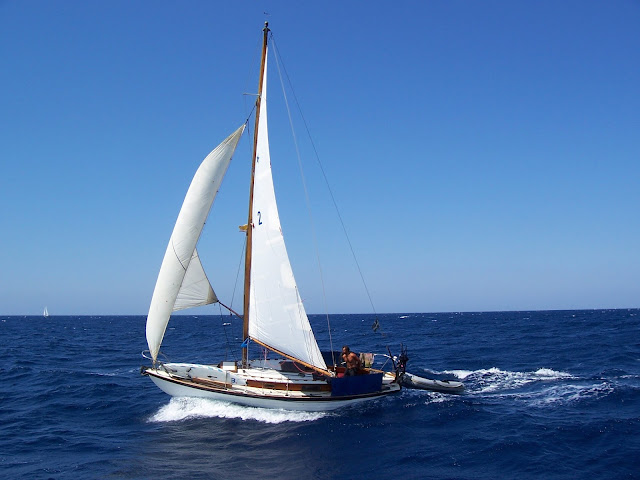 On an old wooden boat there never needs to be a shortage of rags; to dry the bilge and oil sodden hands upon. Having coaxed a recalcitrant engine back to life or the almost constant struggle to keep two mutinous bilge pumps and float switches functioning, a cloth must always be to hand. In dire circumstances when a few remnants had been lost over the side and I was elbow deep in grime, an old holey t-shirt would be grabbed and the rag pile replenished. 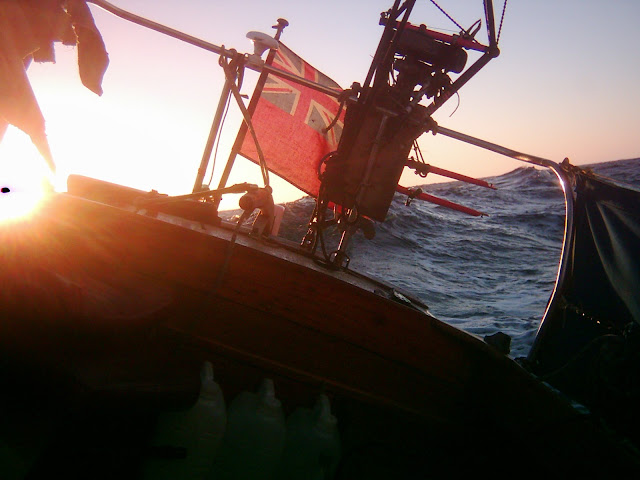 So what's changed? Our boat though not wooden, has many of the hallmarks. We're blessed with grubby bilges, plenty of varnishing to do and an intractable engine necessitating plenty of time nursing it to servitude and cleaning up afterwards. My t-shirts are still purchased from charity shops and worn until bleached by the sun and decayed by sweat they fall apart. I still very much dress in rags but riches are now ours. Since Ravi recently hit the 8 months mark some of his nappies are starting to be too small, to fade, fray and rip. Yes, we're now becoming rich in rags.

We've become nappy origami pros. Our arsenal consisting of different outers; some bought and some homemade, different folds, fabrics and sizes to suits different occasions. Most we bought whilst in Fiji from the supermarket where they were cheap and still the norm. Some are made from a bumper pack of microfibre rags bought in New Zealand and some are made from cut up and hemmed towels. Adorning the safety lines as they flutter in the breeze are always an assortment of nappies. 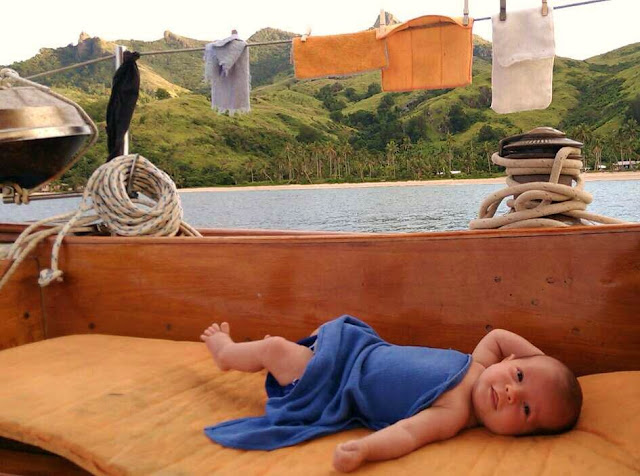 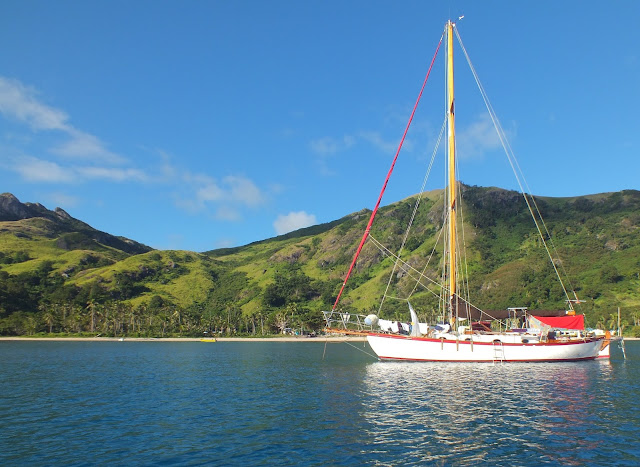 The very notion of disposable nappies horrifies us. Of course they are not degradable, so can't be thrown over the side. Imagine a week or two's supply of soiled nappies festering in a cockpit locker, stinking. Then imagine trying to find a receptacle to put them in. Who would be willing for us to use their bin for this? Then they either get carted off to landfill to not fully degrade or blow about littering the beaches and scarring the countrysides we visit, where people are struggling to cope with their new found 'conveniences'. We're constantly trying to reduce, reuse and recycle so this was just not an option.

When water is short we sometimes wash them in salt water then do a final rinse in fresh. We've heard from a couple with a similarly young stowaway who have had the forethought to sew button holes in their nappies. Now they can be dragged along whilst on passage then raised aloft where the spray can't soak them. Since we've fixed our third water tank, water is often available onshore and it rains here enough, we find we need to use less detergent and heat by using fresh. 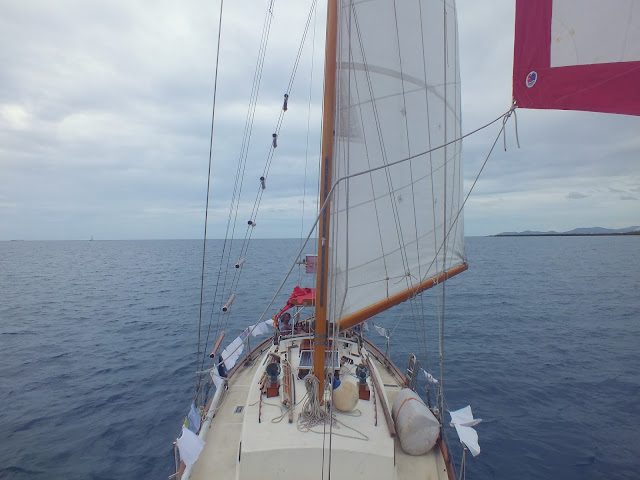 Because we're changing him frequently and only use water and cotton wool to clean him, Ravi has never suffered from nappy rash. There's no doubt it's pretty time consuming but with all the washing, our hands have never been so clean. 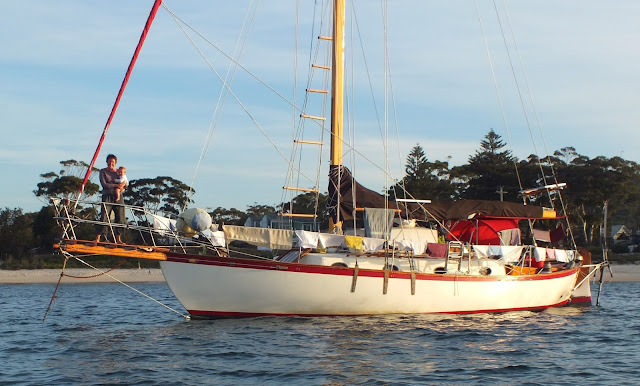 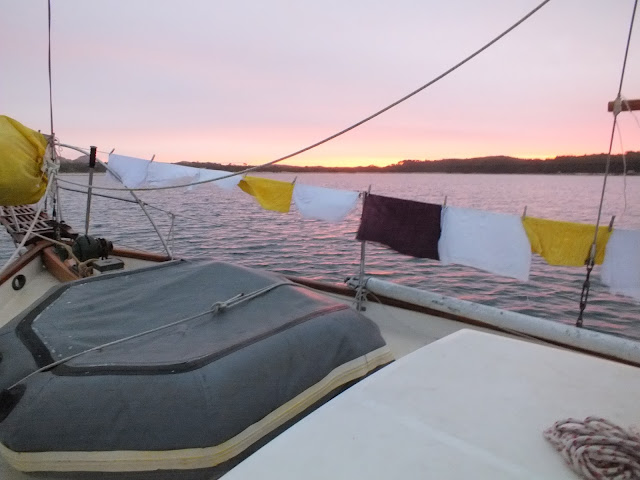 As Ravi grows older we're already starting to reap the benefits of learning when its time for him to go; often catching him before its too late. If we stick him on the toilet at an oportune time we are frequently rewarded. Cloth reared children tend to grow out of nappies when it's time sooner than those using disposables. I think its the advertised lock away pockets that does for them. When finally that day happens we will be truly rich in rags. 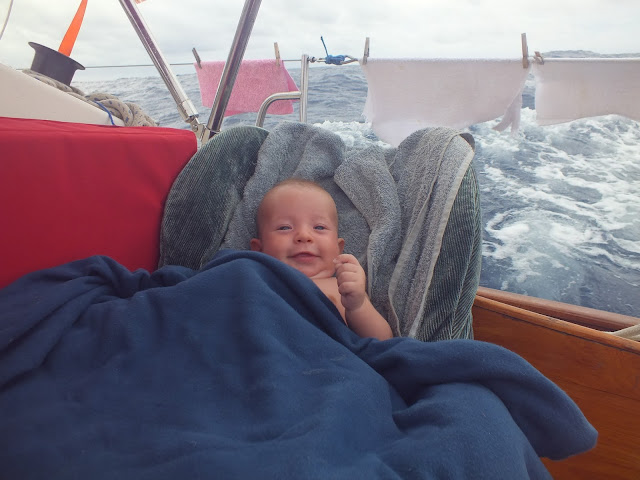