Toto, I've a feeling we're not in Kansas anymore...

We'd got complacent after renewing our Australia visa and temporarily forgotten that time and tide wait for no-one. We found ourselves in Cairns with the realisation that there wasn't space in the season to do all we'd hoped to. Our visa for Papau New Guinea had arrived but there simply was not enough time to go to the reputedly glorious Louisiade archipelago. Yet another thing to go on the 'next time around' list.

What's the rush? Well for one thing it's cyclone season in this part of the world from December. For another, the South East trade winds die off and once further North turn into a North West monsoon making our progress more difficult as we head towards the Malacca straits and Malaysia beyond.

So better late than never we are now rushing along. the barrier reef blurred as we sailed along inside it day and night. We stopped a few times for a snorkel and then for a few days at Lizard island where there were a couple of hills to stretch our legs and a marine research station to look around. Much of the outer reef had suffered bleaching and cyclone damage in that area so though the snorkeling on Lizard island was interesting with the biggest giant clams we've ever seen, we had perhaps already seen better around the Whitsunday islands and further South. We did miss some famous dive sites so can't comment on the whole reefs health but what we saw was nothing like what I (Ruth) remember when I visited in 2002. 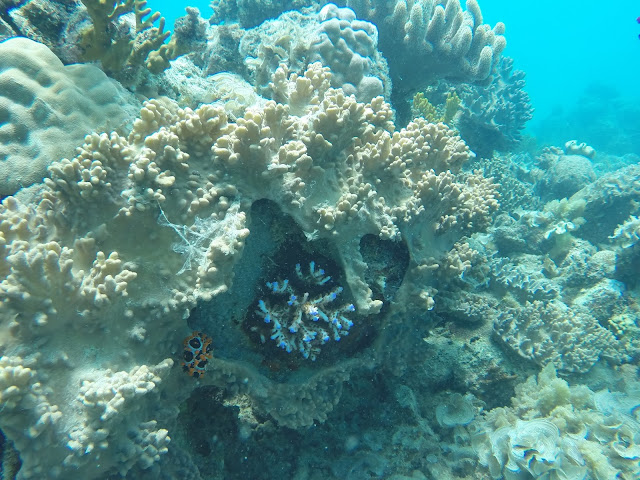 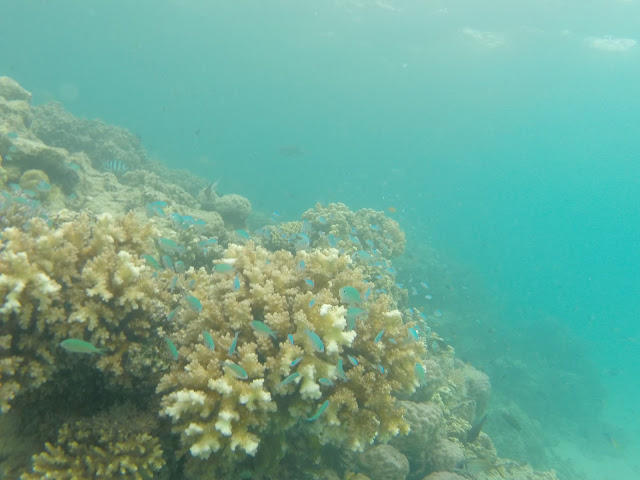 We aren't going to win any awards for our underwater photography yet, but we've all got to start somewhere! It was here at the top of Lizard island that captain cook gazed out to sea attempting to find a way back out through the maze of reefs. Having already stove in and repaired his ship he wanted to be free on the open sea again. We followed the now well trodden path for nothing more than some photos and exercise as the day was too hazy to be able to discern much of the outer reef. 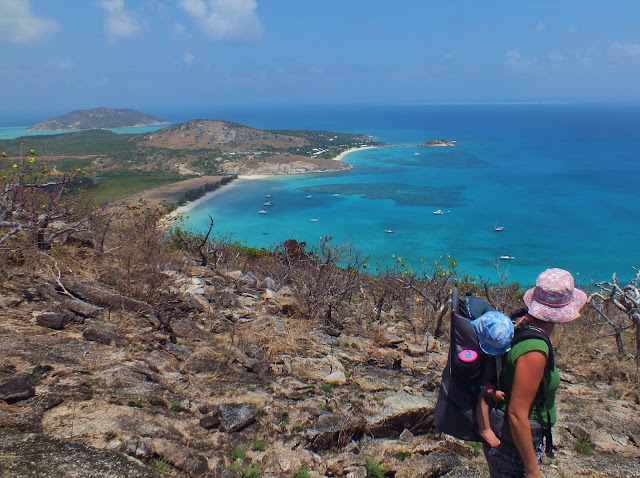 Ravi sleeping as he so often does in the carrier both out on walks or around town.

Rounding Cape York and in to Thursday island was thankfully benign since we'd gone to the trouble to get the tides with us. Thursday and Horn islands were hot and blustery with a rather apocalyptic feel where bush fires were raging. Ravi had his inoculations and we sorted our paperwork to clear out and notify Indonesia we were on our way.

Since leaving Australia Ravi's route map has developed a few extra kinks. The passage started out with three days of fair trade winds but then all traces died out. For the next three days we drifted and tacked against all kinds of light variable winds before finally giving in and changing our plans. It was too far to be able to motor to our planned destination of Kupang so we decided to aim for Saumlaki on the nearer island of Yamdena. We motored the whole way there as the only wind that came was the lightest of North Westerlies (less than 5kn) so it was a good decision. 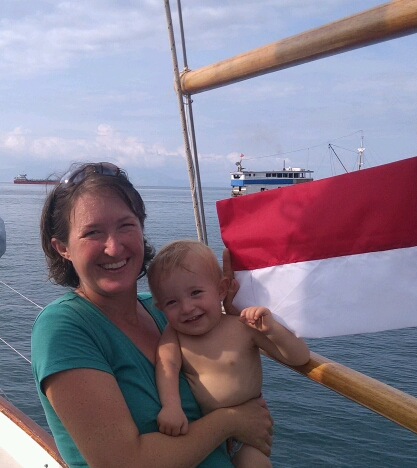 Some cruising friends gave us nylon for the job so now our flags are looking much more professional. Indonesian flag.

Saumlaki is a very different place. The entrance was a delight of traditional boats and big convoluted fishing trap/ stations. Even before we anchored we'd caused a stir with people in dugouts usually with outboards buzzing around the boat taking photos of us and shouting out. This continued around town where Ravi was particularly popular. Whole families would stop their scooter jump off and rush over to take 'selfies' with us and especially if they could hold him. He got pinched from every direction and whisked away whenever they could, so after a bit we needed to find a quiet spot to give him a break! 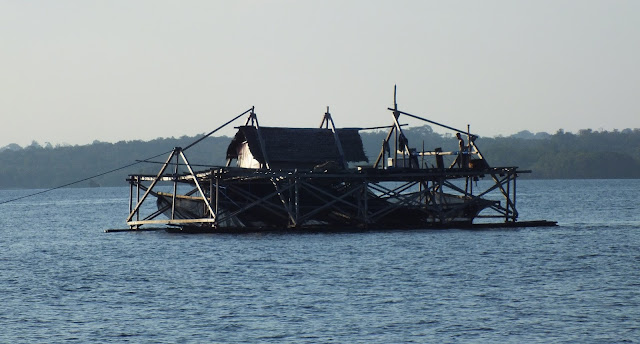 Saumlaki port with a Dutch influenced Christian Church behind in the early morning. This was the pretty part, the town itself was a hot, busy cocophony of rubbish, dust and scooters.

At the port captain's we found out eventually that all the officials we were waiting for had gone to visit an island and wouldn't be back until late afternoon. 'No problem, tomorrow'. But we knew that the officials wouldn't like us just wandering about without clearing in so we found a quiet spot in a hotel and let Ravi have a sleep. We had lunch at a street stall where Ravi, revitalised, enjoyed his attention and his satay mixed rice and veg. Lots of photos were taken to squeels of delight from the scarved ladies.

Then we endeavoured to find the immigration office which turned out to be the guys house who by then had returned from the island jaunt.

Here's where we found our problem. There are three visa options in Indonesia. A free 30 day non renewable one available to citizens of most countries, a visa on arrival which you pay for which also gives 30 days but is extendable once only - the one we wanted, and a cultural visa which must be applied for out of the country with an Indonesian citizen 'sponsor' who guarantees your good will and good character which is valid for 30 or 60 days but then extendable monthly up to 180 days.

However we had not realised that this middle visa is only available in seaports which are near international airports. Saumlaki's airport is domestic only and so though it is clearly advertised as one of the 19 available inward and outbound clearance ports of Indonesia's 16,000 islands, it is not possible to get this particular  visa there (nor is it at the next nearest one Tual).

So we were scuppered. There's no way we could get through the whole of Indonesia within 30 days. It would be around 2,500 miles with wind and current against us for the last 800 and probably quite light winds all the time. Even if we checked out wherever we got to after 30 days, there was a high likelihood we would need to stop for water and fuel on our route onwards.

There was no budging the immigration guy though, he just couldn't give us the visa we wanted. Our only option was to take the free 30 days and accept that we had to be out after that. After a bit of deliberation we decided to get the issue sorted now whilst we had options of other countries to visit with Indonesian embassies. Darwin, Australia or Dili, East Timor. One was much more on the way than the other and according to a little online research should be perfectly possible.

We looked around a bit over the weekend, bought some water and fuel then cleared out on the Monday. Saumlaki was a difficult town to really like. The people were friendly and fun but the heat, poverty, dirt and noise were an assault on the senses. We found it particularly galling whilst nosying about to see tiny empty hovels with families living under incomplete rooves and behind broken walls whilst the cities' many churches towered above them opulent, air-conditioned; pristine.

The people living there not only have to buy drinking water but also have to buy in water which is unfit for drinking from tankers in order to wash with; that's those who have tanks. Most don't. Most have no access to hygeine nor space to breath with their tiny spaces squashed in. We see many different kinds of poverty on our travels but poverty of space with no access to drinking water is really basic need. For sale along the market street the fruit and veg supply was meagre. Onions were shipped from Java and so cost four times the price of those in Australia. We bought some eggs but they were almost all off. In the shops were mostly soap and biscuits. Life here for these people really is a daily struggle.

So on we needed to go to Dili, Timor Leste which is where we are now. We managed to sail much of the way here though the winds were often light we only motored when we dropped below 1.5 to 2kn. Mostly in the early hours of the morning when there might not be a breath. We had some variable northerly wind as we sailed along Timor Leste in the early hours of Friday, so it was nice to have peace and quiet to savour the sounds of the invisible whales nearby. 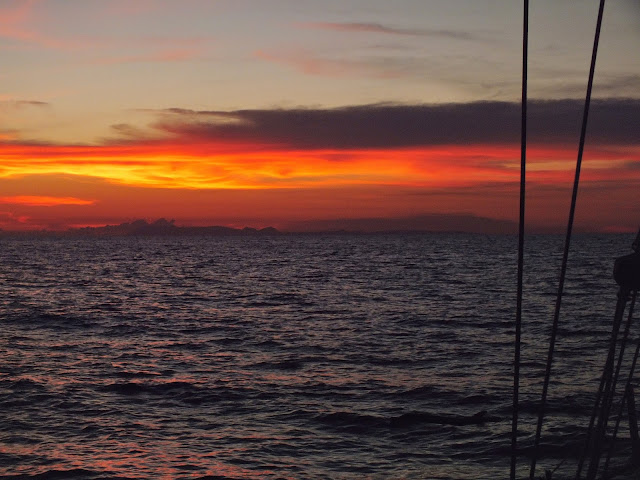 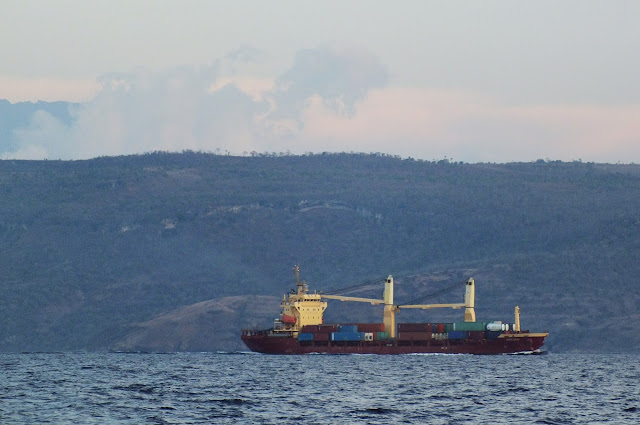 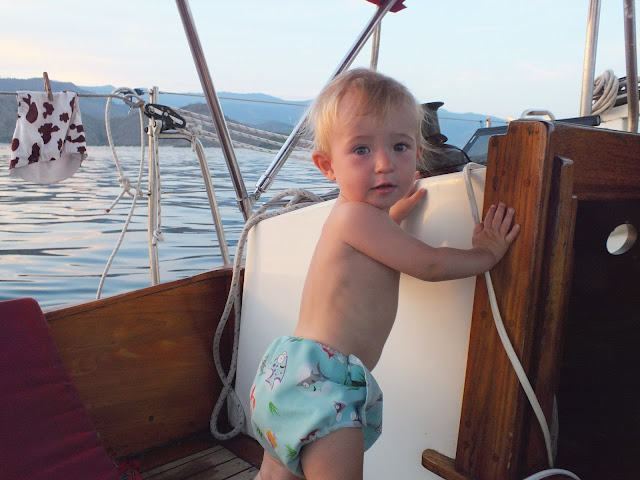 Ravi greeting the sunrise and another new place 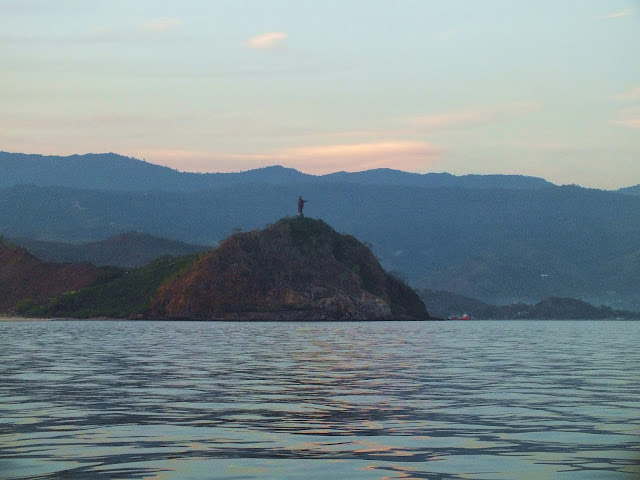 Christo Rei overlooks Dili, Portuguese influences abound though Timor is certainly independent now and only the elite and older educated Timorese speak the language. The local tongue is a mixed dialect of indigenous language with some Portuguese words dropped in for words that were missing. Most can also speak the main Indonesian Bahasa language. 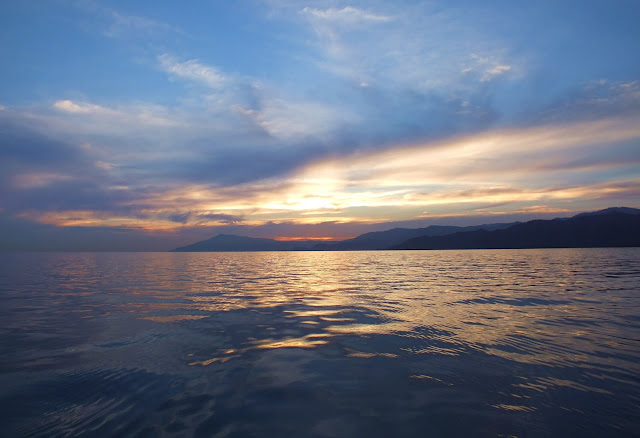 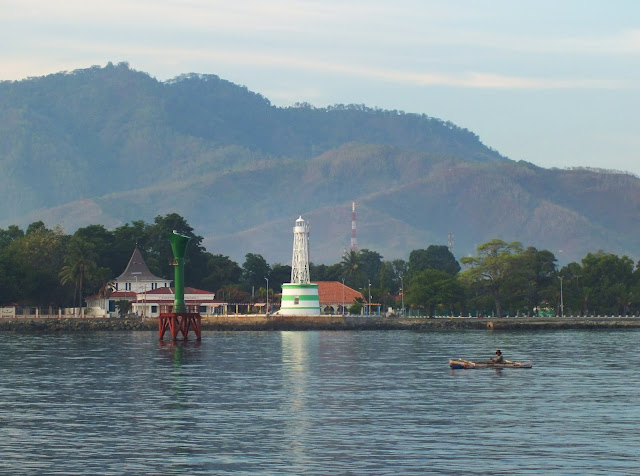 Harbour entrance mark at Dili with an early morning fisherman

Clearing in here was easy in comparison to Indonesia though we did have to pay $30 each for a visa though it was advertised as free for Europeans: UK and a few other European countries were not included. 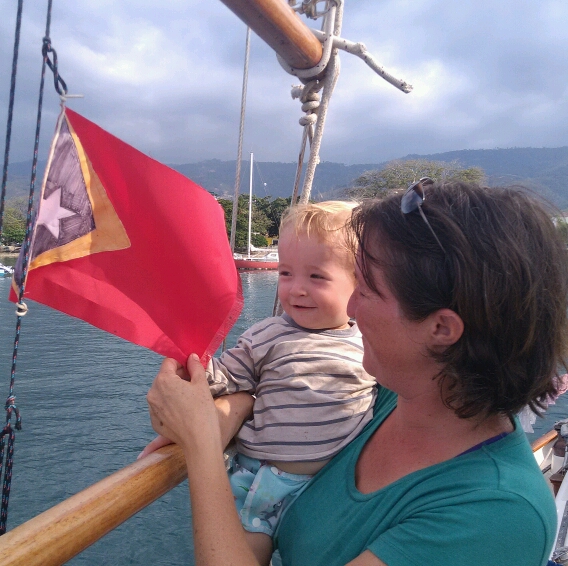 The flag of Timor-Leste we didn't worry about hemming it since we'll be here less than a week.

We still haven't quite decided which visa for Indonesia to get here since there are costs and complications with each and we need to rush on in any case. We shall see what the weekend brings and decide on Monday. This afternoon we are enjoying a glass of Porto with some blue cheese and cured meat courtesy of the Portuguese influences here. Tonight there is Portuguese music in a nearby bar so Ravi is having a long afternoon nap under a fan to prepare for evening revels.
Posted by Impetuous at 9:50 AM 1 comment: