It's a topic many blogs broach and people often wonder about so we thought we'd toss our hat into the ring.

On Impetuous we don't have a budget as such. We just try to make our money last as long as we can whilst having what we value. Though we did try to guess how much we might spend this last year and made that our goal to save up whilst we were in England. As we've been sailing for a year now I thought it was high time we work out how much it really has cost us. 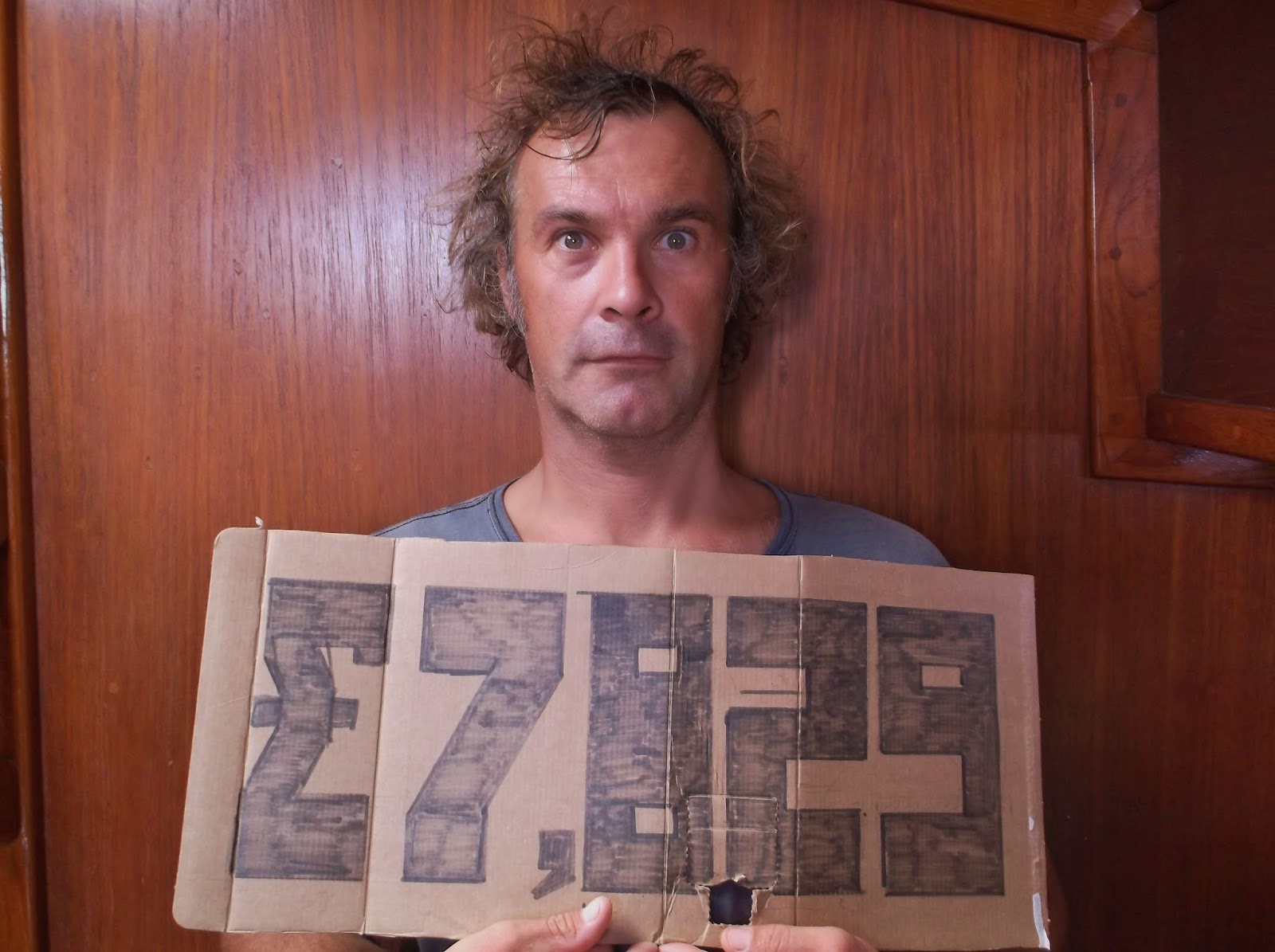 Is that a lot or a little? We have mixed views on this. It's less than we'd thought, but we always think we could live more frugally. Lets run through what this year entailed.

We've sailed over 10,000 miles this year. We left Guatemala for Belize in March then had a month in Cuba. We then spent a few months in Panama seeing some of the San Blas islands and Las Perlas on our way out into the big blue. Over three months spent in French Polynesia were a joy; sailing most days and visiting some of each group; the Marquesas, Tuamotus and Society islands. We then moved on through the Cook islands to lovely Tonga before heading down to New Zealand for the cyclone season.

So what were our main expenses?

The Panama canal was a big deal for us and cost us £650 ($1,000). You can pay more but we did it without an agent; standing our own bond, doing the tiny amount of paperwork and avoided hiring help by taking backpackers through as line handlers. It was a great experience for all. The officials were a joy to deal with and we think, on reflection, that it was great value for money.

Checking into and out of so many countries adds up, but we were saved financially by both French Polynesia and New Zealand being entirely free to us lucky Brits. We estimate around £700 (just over $1000) going on such fees this year. We may have had to pay to be in Cuba (around £150) for a month but it was a wonderfully cheap month where we were able to replenish our rum stocks for £2 ($3) a bottle and a roadside pizza cost the same as a roadside icecream; 12.5 pence (20c).

We filled up our diesel three times this year. Firstly we'd left it empty in Guatemala, then again before leaving Panama and lastly in Bora Bora where they offered duty free fuel. We'd had some windless times around Panama and then the Societies particularly while we were trying to show Chris and Jean (Duncans' parents) a good time. We've still got over half a tank left of this. That's £500 ($750) a surprisingly large amount to us; given how much we avoid motoring and rely on solar for all our electricity. The price of fuel was almost exactly the same at all three places, about £2.60 ($4) a gallon.

We use on average a 9kg gas bottle about every 6 weeks, that's £130 ($200) largely used to make an inordinate amount of tea. We've never paid for water though others certainly do sometimes. We only stayed in a marina that one time in Panama ($50 for one night... still spitting feathers) and we paid for a mooring buoy once in Tonga (12 Panga, £4) – then moved to anchor the next day.

This total also includes a fair amount of cash going to the marina in Guatemala where we'd left Impetuous for 5 months whilst we were back in England visiting family and friends, and earning money. This was $110 per month US for an excellent service; a clean boat and monthly email about how beautiful she still was (thanks Burnt key). Whilst still in the Rio Dulce we paid a sailmaker to recut our new main (which had come with the boat but didn't fit). He quoted for the whole job; re-stitching and three new reef points but we baulked at the price and decided a better investment would be to buy some sailmaking equipment and hardware for a fraction of the cost.

About £500 went on the boat; filters, varnish and said sail adjustment stuff. We were ahead on this; though we didn't leave Texas with a finished boat, we certainly left with a dependable one given all the work we'd done on her.

We have third party insurance for Impetuous. At £200 a year we think it's important. If she drags her anchor and ploughs into a superyacht the damage (to it) is covered. Also morally we want it, lest we accidentally injure anyone else. The responsibility for our own health and the boats wellbeing falls to us.

So that leaves about £4,800 (£100 or $150 per week) for flour, fishing gear and fun; pillows, pasta and peanuts; bouncy balls, bacon and beer. Our biggest spending months on these were in Panama stocking up ready for expensive French Polynesia and now we're in New Zealand where our stores are intentionally low and the availability of nice things is high.

Of the people we've met we're certainly at the more frugal end, though some do spend less. We eat really well on Impetuous. If it was a problem we could save money by buying less vegetables, no meat, less olive oil, capers, olives, whole spices, chocolate, butter and milk but we don't want or need to. We've purposefully not estimated the proportion of this total that goes on alcohol... make of that as you will!

What probably helps to keep our costs down is that we always cook at home. We never feel the urge to eat out unless there's something new to learn and it's cheap. In the Marquesas one of the main local favourites is 'Poisson Cru' which we tried at roadside stalls a few times; trying to learn the quantities of lime and coconut in which you eat the raw fish, so now we can have it at home; delicious. About 10 different kinds of dried beans, 3 different lentils, various flours, rice and pasta provide a backbone to an endless variety of meals aboard Impetuous. We love visiting local markets, trying to find foods growing wild and attempting new things; of course this results in plenty of disasters along with the triumphs.

We do every job we possibly can ourselves on the boat. We both share an interest in how things work and enjoy learning new skills even if this means making mistakes sometimes. After spending so long restoring Impetuous we really value the confidence we have in our own work and understanding her simple systems on which we rely.

Hi Ruth and Duncan,
Thanks for another great and informative blog post. It's amazing what you can do on so little money. And also amazing that you can probably still do it even more cheaply while still living the good life. We motored more than we'd planned last year, so that's something we want to cut down on when we set sail at the end of March. We also want to see less of marinas - continuous anchoring is what I want.

I was delighted to see how 'little' you spent on the Panama Canal, as I've heard some outrageous prices for that. It's good to know that it might be more within our sights than I had previously thought. If it ever does look like a becoming a reality for us, then I'll be tapping you for information about how you got through the paperwork, etc, on your own.
Happy sailing, Martina.

Hi - thanks for sharing a link to your expenses through the Frugal Female Sailor FB group. This is a great post - love the detail you provide and the fact that you give the exchange rate in rupees :-)

I've added you to our sailing blog list on our site and am looking forward to following along with your adventures.

Hi, hope your all well, we're looking forwards to more blogs. Just wondering what insurance you use and if you have any thoughts on the matter. ?
Cheers
Nick and Nadja

Hello Nick and Nadja,
When we set out we used Pantaenius for third party liability only. We have since let it lapse as they put up the premiums more than we thought fair and we feel the chance of us making a claim is very low. So we add it to the list of things we're self insuring...
Nice to hear from you.
Ruth